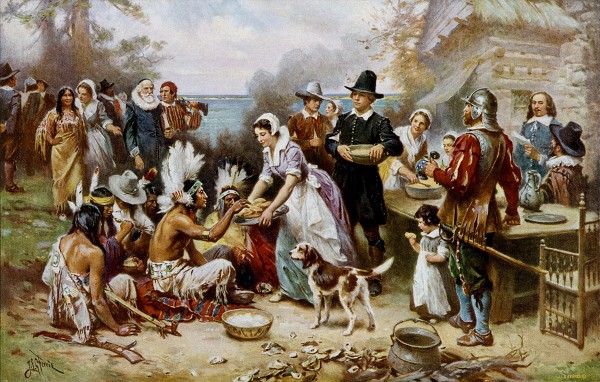 This coming Thursday, November 22, is Thanksgiving in America. The celebration of a bountiful Autumn harvest is an ancient tradition in many cultures.

The Romans celebrated Ieiunium Cereris, dedicated to Ceres, the goddess of agriculture. The Chinese have been celebrating Zhōngqiū Jié (Mid-Autumn Festival) for millennia. In Japan, it’s Jugoya. For the Hindus of India, it’s Sharad Purnima. The Celts of the British Isles celebrated Lughnasadh, which is the Harvest Thanksgiving in England and Canada today.

The origin of Thanksgiving in America is traditionally that of the Mayflower Pilgrims at Plymouth Rock. Yet, the Kindergarten school plays all over the country this week, with five-year-olds portraying the noble Indian, Squanto, teaching the helpless Pilgrims how to feed themselves, is not how it happened.

So, here’s the real history of America’s First Thanksgiving, the extraordinary lesson to be learned from it, and a very personal lesson we may learn from Thanksgivings across the world.

The real history of the Mayflower Pilgrims was recounted by their leader, William Bradford (1590-1657), in his book Of Plymouth Plantation, completed in 1647. 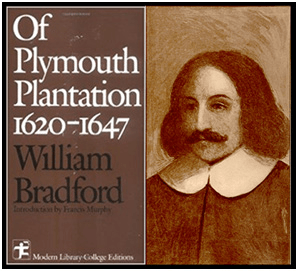 It is from Bradford that we learn of Squanto, who did indeed show the Pilgrims how to “set” or plant corn (a new unfamiliar crop for them).

Then we learn that the Pilgrims taught the Indians how to grow more corn than they ever had before:

“The Indeans used to have nothing so much corne as they have since the English have stored them with their hoes, and seene their industrie in breaking up new grounds therwith.”

Reading the real history of the Pilgrims is so revelatory because it is as effective a refutation of socialism and affirmation of capitalism as there has ever been.

The Pilgrims landed in December 1620, suffered a horrible winter, figured out how to fish and hunt that spring and summer so that there may have been some sort of feast with friendly Indians in the fall of 1621 – although Bradford doesn’t recount the incident.

But by 1622, they were starving. There was no “Thanksgiving” that year. There was the next year – for 1623 saw the Pilgrims in well-fed abundance, and thus, was the year of the real First Thanksgiving.

What made the difference? Here are Bradford’s own words (albeit with modern spelling like “been” instead of “bene” – the original spelling is in the link above; the parentheses are his, the explanatory brackets are mine), describing Anno Dom.1623:

“It may be thought strange that these people should fall to these extremities in so short a time, being left competently provided when the ship [the Mayflower] left them, and had an addition by that moyetie [portion] of corn that was got by trade, besides much they got of the Indians where they lived, by one means and other.

It must needs be their great disorder, for they spent excessively whilst they had, or could get it. And after they began to come into wants, many sold away their clothes and bed coverings; others (so base were they) became servants to the Indians, and would cut them wood and fetch them water for a cap full of corn; others fell to plain stealing, both night and day, from the Indians, of which they grievously complained. In the end, they came to that misery that some starved and died with cold and hunger…

All this while no supply was heard of, neither knew they when they might expect any. So they began to think how they might raise as much corn as they could, and obtain a better crop than they had done, that they might not still thus languish in misery.

At length, after much debate of things, the Governor [Bradford] (with the advise of the chiefest amongst them) gave way that they should set corn every man for his own particular [plant corn on his own private land], and in that regard trust to themselves; in all other things to go on in the general way as before.

And so [there was] assigned to every family a parcel of land, according to the proportion of their number for that end, only for present use (but made no division for inheritance), and ranged all boys and youth under some family. This had very good success; for it made all hands very industrious, so as much more corn was planted then otherwise would have been by any means the Governor or any other could use, and saved him a great deal of trouble, and gave far better content.

The women now went willingly into the field, and took their little-ones with them to set corn, which before they would allege weakness and inability; whom to have compelled would have been thought great tyranny and oppression.

The experience that was had in this common course and condition, tried sundry years, and that amongst godly and sober men, may well evince the vanity of that conceit of Plato’s and other ancients applauded by some of later times — that the taking away of property, and bringing in communities into a common wealth, would make them happy and flourishing, as if they were wiser than God.

For this community (so far as it was) was found to breed much confusion and discontent, and retard much employment that would have been to their benefit and comfort. For the young-men that were most able and fit for labor and service did repine [complain] that they should spend their time and strength to work for other men’s wives and children, with out any recompense.

The strong, or man of parts, had no more in division [in amount] of victails [food] and clothes, than he that was weak and not able to do a quarter the other could; this was thought injustice. The aged and graver men to be ranked and equalized in labors, and victails, clothes, etc., with the meaner and younger sort, thought it some indignity and disrespect unto them.

And for men’s wives to be commanded to do service for other men, as dressing their meat, washing their clothes, etc., they deemed it a kind of slavery, neither could many husbands well brook it.

Upon the point all being to have alike, and all to do alike, they thought them selves in the like condition, and have as good as another; and so, if it did not cut off those relations that God hath set amongst men, yet it did at least much diminish and take of the mutual respects that should be preserved amongst them.

And would have been worse if they had been men of another condition. Let none object this is men’s corruption, and nothing to the course itself. I answer, seeing all men have this corruption in them, God in his wisdom saw another course fitter for them…

By the time harvest was come [fall 1623], instead of famine, now God gave them plenty, and the face of things was changed, to the rejoicing of the hearts of many, for which they blessed God. And the effect of their particular planting was well seen, for all had, one way and other, pretty well to bring the year about, and some of the abler sort and more industrious had to spare, and sell to others, so as any general want or famine hath not been amongst them since to this day [1647].”

There is no better historical lesson of why private property capitalism produces abundance and prosperity, while socialism, in Winston Churchill’s famous observation, produces the opposite:

“Socialism is a philosophy of failure, the creed of ignorance, and the gospel of envy, its inherent virtue is the equal sharing of misery.”

Now for the personal, which starts with a confession.

Last March, I was diagnosed with serious prostate cancer requiring immediate surgery to remove my prostate. This takes months for recuperation, during which I could not lead my expeditions, while I learned the surgery had not gotten everything and watched my PSA levels begin to steadily rise yet again.

Thus, I underwent a series of intense radiation sessions finishing at the end of September. One month later, my doctor pronounced me in full recovery – and that I was good to go, to lead my 5th Himalaya Helicopter Expedition and celebrate my 75th birthday during it (see Himalayan 75 in Escape Artist). I just returned home yesterday (11/18).

So, you can see I have a lot to be thankful for this Thanksgiving! Yet, there is a far broader lesson that applies to everyone. Life is short, it lasts but a snap of the finger. We cannot control this fate, but we can control our attitude towards it.

The best attitude, I believe, is to be infinitely grateful to be blessed with existence, to be granted this one life on earth, to be a part of humanity and its history. To be in constant awe of the privilege and thrill of being alive.

Americans, like so many other people around the world, set aside one day of the year to give thanks for what they have. It is a wonderfully important commemoration. Yet, that attitude of being infinitely grateful for the opportunity of being alive is something we can take time to appreciate every day of the year, not just one.

Every day can be our own personal Thanksgiving. That’s the real lesson for all Escape Artists.

Puerto Rico is where it’s at for crypto investors

How Can I Benefit From Offshore Incorporation?