A New Life in Kabul: Living In Afghanistan - Escape Artist 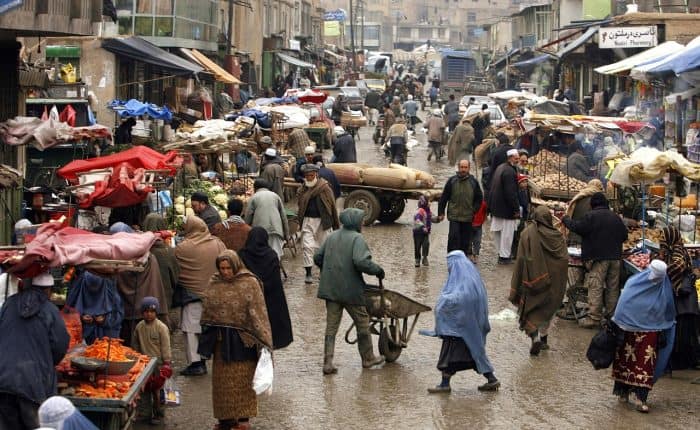 It’s just past midnight on a Thursday evening, and the party is going strong. A generator pumps artificial light into the green-walled restaurant, where about 50 people sit smoking and chatting animatedly. Beer cans litter the tables, along with leftover Bratwurst and pistachio shells. And despite the fact that many of the patrons–UN workers, employees of non-governmental organizations–have a strict curfew, no one seems headed for the door. Indeed, the two suicide bombings earlier this week seem far behind now. What’s on everyone’s mind is not death, but who will be the first to turn on the karaoke machine. Finally, an outgoing German gets the crowd going with a rousing rendition of “New York, New York,” altering the words to fit our environs: “If I can make it there/ I’ll make it anywhere/It’s up to you, Kabul, Kabul!”

Eight months ago, when I told my friends and family back in Washington, DC that I was moving to Afghanistan to start a new career, none of us imagined this would become a regular scene from my life. Indeed, my friends’ initial reaction was to question my sanity. And who could blame them? So much of what the word “Kabul” evokes is negative.

The nightly news delivers images of haggard children and bombed-out buildings, a land recently characterized by grotesque public executions and mistreatment of women. Everyone envisioned my new life as one of restriction–sleeping in bunkers, cowering from military operations, and being constantly surrounded by men with guns.

So why did I decide to come here? Quite frankly, I was sick of everything. Sick of the security threats, the delays on the Metro, and the frantic pace of my job as a proposal writer for government contracts.

Riding the train across the Potomac each morning, I’d watch the sun rise over the smokestacks down the river and dream of a different life, one with a slower pace, where people savored kindness.

Maybe, I mused, I’d move to Mexico, Romania or India. I have to admit, Afghanistan wasn’t really on my radar screen, until an actual, well-paid job opportunity in Kabul presented itself to me. It was a perfect mesh with my skills, and I felt the fates had aligned in my favor. Therefore, in early January I crossed the world to reach the snow-capped country that would become my new home.

The periodic emails I get from home usually feature some question or statement to the effect of, “Tell me everything about what it’s like to live there!”  My compatriots seem to have the impression that I’m either hunkered down in a cave listening to bombs fall every night, or gallivanting Lawrence of Arabia-style over the Hindu Kush on a camel.

The truth is, there are many days I forget I’m in Kabul at all. While office environments vary across the country–ranging from high-tech to primitive–chances are most expats end up working in very much the same context as at home in the West. Every morning, I ride into the office, grab a cup of coffee and sort through my emails, read the newspaper online, then get busy on my laptop with the numerous reports, papers and other documents I’m in charge of editing and publishing.

It’s only the “in-between times” that I realize I’m in a different world entirely. Lunch is traditional Afghan fare eaten off carpets on the floor; driving to meetings means sitting in terrible traffic jams while beggars tap at the car windows or try to sell local papers for a dollar. And everywhere I’m surrounded by the sounds unique to this world–the lilting cadence of the Dari language, horses clopping along the roads, and the interesting tunes of Kabul’s bus horns.

The Kabul of my daily life is like any world capital, thriving with activity. On the main streets, taxi cabs hustle for customers while vendors sell the latest electronic gadgets. Young women in stylish scarves and platform shoes walk to their jobs beneath signs advertising mobile phones.

Even in the areas most distressed from 20 years of war–those Soviet-style high rises whose upper floor beams wave like exposed steel tentacles–the hubbub of the market goes on.  Living in Kabul today is what I imagine it must have been like living in Prague after the fall of communism, except with more dust and a few million landmines.

That said, there are disadvantages to life here, especially if you’re female. With the exception of one treeless square, there are no parks for women, and the few theatres around town are also male-only.

Men feel free to fall all over themselves when staring at you in the street, and the bold ones may even shout their advances: I can’t count the number of times I’ve been told “I love you!” by a complete stranger. Likewise, conservative dress, complete with head scarf, is still the fashion of the day—no Afghan woman would dare wear short sleeves outside the home, even in the hottest months.

The home is actually one of the best advantages of Afghan expatriate life. Because employment must be secured before moving to Kabul, most companies and agencies readily provide housing to their employees. While the U.S. Embassy staff—confined to a barbed-wire compound and sleeping, literally, in metal containers—have the worst arrangements, the majority of Westerners live in large, spacious homes with several other coworkers. My own house features four bedrooms with en-suite baths, our own cook, large living areas and a walled garden spacious enough for weekend soccer matches. It’s a good thing I didn’t have to seek out accommodation myself, too, as Kabul rents have skyrocketed since the post-9/11 influx of Westerners, and rival some of the most expensive American cities.

The major differences between life in Afghanistan and the West are related to its being a developing country. On a practical level, this means the basic infrastructures we are used to is simply non-existent. Electricity is sporadic and dependent on generators, water shortages are common, and the pot-hole filled roads leave much to be desired. There is also little access to reliable health care. The latter point should not be taken lightly. With poor sanitation and heavy pollution, Kabul’s denizens suffer numerous respiratory and gastrointestinal ailments. If you’re coming here for the long haul, bring a mobile pharmacy with you. But its status as a developing country also means that there’s always something interesting going on. Kabul is filled with the carcasses of airplanes, tanks and what were likely once palatial homes and gardens. In the nearby hillsides, one can sit in the shell of a looted hotel and sip tea while being watched over by a man with a Kalashnikov, or climb to the top of an ancient fort surrounded by a “garden” of military debris.

The markets are overflowing with 1980s carpets emblazoned with guns and flowers. Sure, life may be taxing, but boring? Never!

Make sure you read Part 2: A New Life In Kabul: Living in Afghanistan, you will love it!