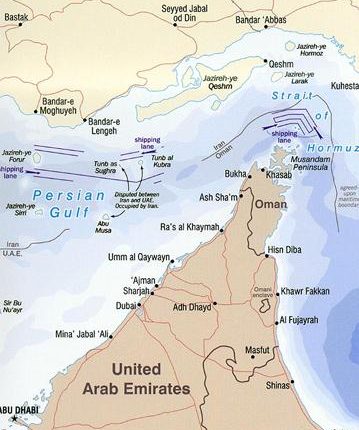 This is a story about 21st century Persian smugglers and 19th century British soldiers driven crazy by literally going “around the bend.” It takes place in one of the world’s most inhospitable and strategically critical places in the world – the Strait of Hormuz.

This is where the sharp tip of Arabia, known as the Musandam Point, sticks into the Persian Gulf, separating it from the Indian Ocean. The Strait of Hormuz is only 30 miles wide from Musandam Point to the coast of Iran, and through it passes a substantial fraction of the world’s crude oil, pumped out of the Saudi, Kuwaiti, Iraqi, Iranian, and Emirati oil fields and into giant supertankers which snake through the Strait in continuous succession.

(Note that Musandam is an enclave of the Sultanate of Oman, separated from the rest of Oman by the United Arab Emirates or UAE. The peninsula of lifeless jagged mountains is uninhabited save for a few small villages.)

The Strait of Hormuz is thus the world economy’s most critical choke point, which is why Iran’s Mullocracy is always threatening to mine or block it in some way.

Back in the 1860s, however, it was critical for the British as the shortest and most viable way for a telegraph cable from London to India, the crown of the British Colonial Empire.

They had been able to lay cable under the Mediterranean, then across the Syrian and Mesopotamian deserts to Basra at the head of the Persian Gulf through an arrangement with the Ottoman rulers in Constantinople (Istanbul).

But no arrangement was possible for a land-laid cable through the territories of wild tribes in southern Persia and Baluchistan. Thus, the Brits laid the cable along the floor of the Persian Gulf to Musandam Point, and thence under the Indian Ocean to India.

This required a relay station, which the Brits located on a tiny rocky island sheltered deep within an inlet, the Khor ash-Sham, of Musandam Point. The local fishermen called the islet Jazirat al Maqlab, but the Brits dubbed it Telegraph Island.

Less than 200 yards wide at any point, Telegraph Island is an ultimate in desolation. With the Khor ash-Sham surrounded by giant treeless barren mountains of sheer rock, the heat for 9 months of the year is blast-furnace unbearable. The isolation was almost total. Being stationed there drove men mad.

The only community nearby was out of the inlet and on the Strait itself, a tiny oasis of date palms with a small fishing village called Khasab. It’s where the British workers and soldiers on Telegraph Island would escape to when they had the rare chance. They dreaded going “around the bend” of the Musandam coast and into the isolation of the Khor ash-Sham once again.

The Telegraph Island relay station was manned for only five years, from 1864-1869, but it gained such a fearsome reputation for driving men to madness that the expression “going around the bend” for somebody turning wacko became popular throughout the entire British Empire and onto America.

But what would drive those guys stationed at Telegraph Island permanently around the bend is to know that today at Khasab there is a nice small hotel with air conditioning, cold beer, a swimming pool, and a motorized dhow (fishing boat) that takes folks on a cruise to see where the Brits suffered 140 years ago.

That’s where I am right now, writing this on the balcony of my room overlooking the Strait of Hormuz. The sun is setting, and I can see it lighting up the cliffs of Iran.

Fly to Dubai in the UAE. From there you can drive through the other Emirates like Sharjah and Umm al Quwain, then up into the wasteland of Musandam to Khasab.

I didn’t come here to see Telegraph Island – although I couldn’t pass up the chance, so here’s what it looks like, with Omani soldiers on it and the remains of the British fort: 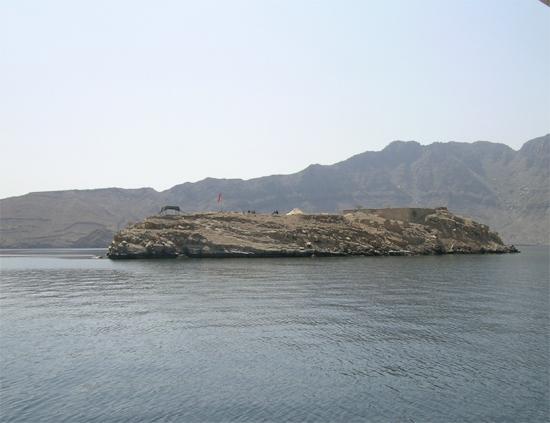 Go down to the wharves in Khasab and you will see them piled high with waterproof-wrapped bales of clothes, cases of soft drinks and juice, cartons of children’s toys and electronic goods, an entire shopping mall of stuff, all ready to be crammed and tied down into 20-foot-long open speedboats with powerful outboard motors capable of outrunning Iranian Navy patrols.

There are dozens, scores, of waiting speedboats. The run from Khasab harbor to coves on the Iranian coast or the Iranian island of Qeshm takes about three hours. An average night will see between 100 and 200 or more speedboats racing across the Strait of Hormuz smuggling goods into Iran.

All they return with in the morning are goats.

At the harbor is a line of empty trucks, having disgorged their cargoes trucked up from Dubai in the UAE the day before. As the speedboats arrive back from Iran, the goats are tossed onto the wharf and herded into the trucks to be delivered to Dubai meat markets.

The entire enterprise is out in the open. I wandered around and took all the pictures I wanted. The smugglers either paid no attention to me or smiled when I waved to them. Those who could speak a little English spoke freely to me. One fellow invited me into his boat to have my picture taken with him.

Here’s what they said:

“Dubai is the shopper’s paradise of the world. Anything there is cheap because there are no taxes or tariffs or duties. We buy what our people in Iran say is needed and have it trucked to Oman where we pay a 6% duty tax.

Taxes in Iran are 60% to 100% or more. So this is a good business for us. Here is the smugglers’ paradise! We are doing nothing illegal in Oman, like carrying alcohol products, so the government or soldiers give us no trouble. We have to be careful to avoid the Iranian Navy. So we wait for our people on the coast of Iran who are watching the patrol boats to call us by mobile phone to say where they are and when to come.

If we are caught, the navy used to shoot us, kill us, and sink our boats. Now we can pay them money to let us go. But this is expensive, so we are good at not getting caught. Most of the time we go at night, but now we are also going in the day.

There are so many poor people in Iran now. All they have that we can take back and sell in Dubai are the goats.

Without the crazy mullahs and their crazy taxes, we wouldn’t have to make this dangerous life to have money for our families. Tell America to come!”

And here is what the operation looks like. This is getting ready for the night run: 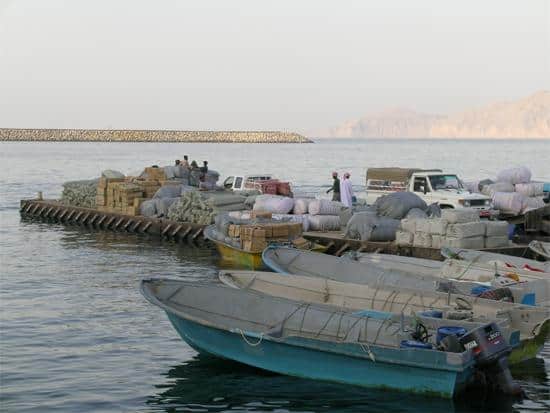 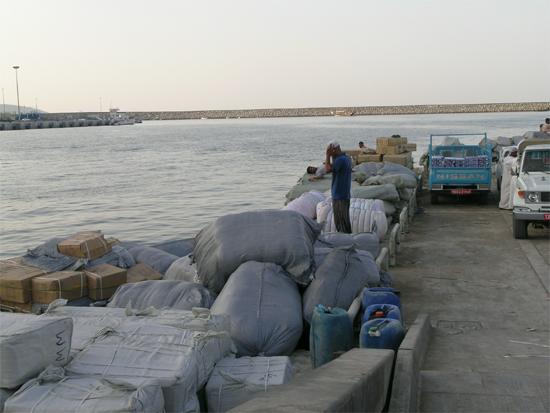 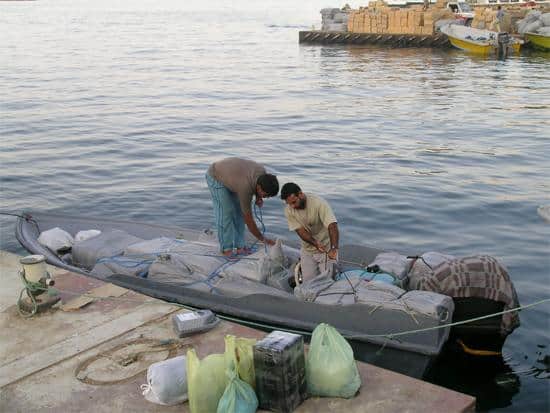 Here I am with my Persian smuggler buddy: 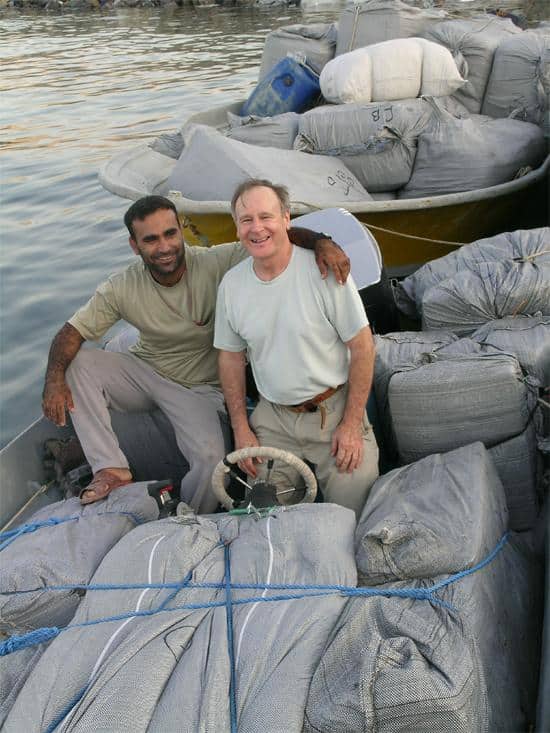 Returning with the goats in the morning: 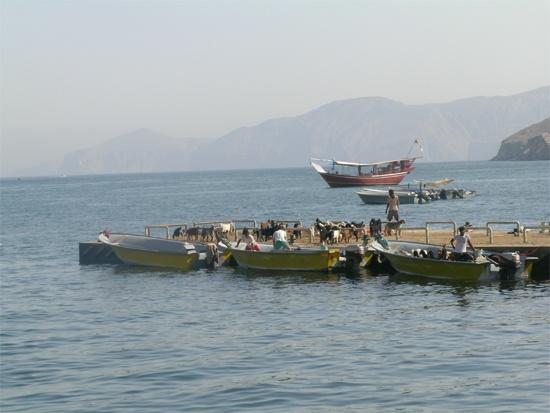 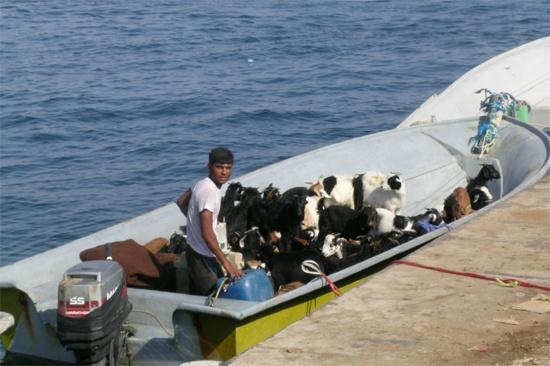 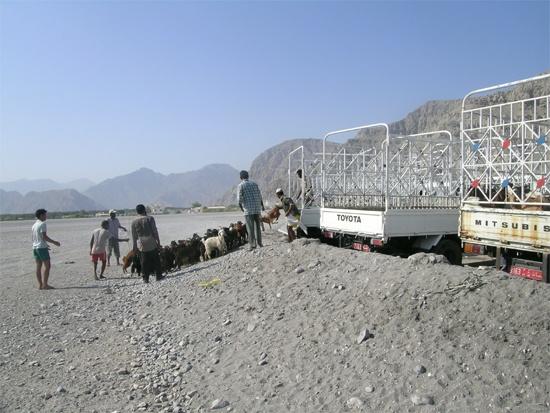 Getting ready for a day run: 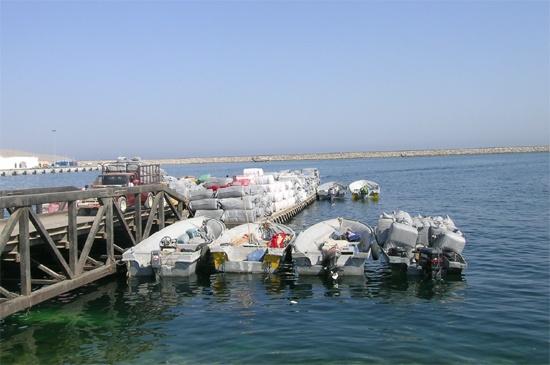 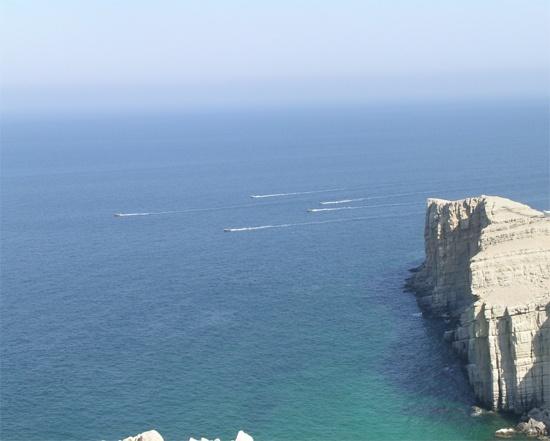 The world’s most strategic waterway, the Strait of Hormuz, is a smugglers’ paradise. If the mullahs can’t control that, they don’t have firm control over much else.

From Kurds smuggling booze and cigarettes on horseback at one end of Iran to Persians smuggling clothes, toys, and electronics at the other – and returning with either goats or nothing (you can’t carry too many goats on a Kurdish horse) – should tell Washington that the mullahs’ grip on Iran is slipping, that theirs is a regime that can be had.