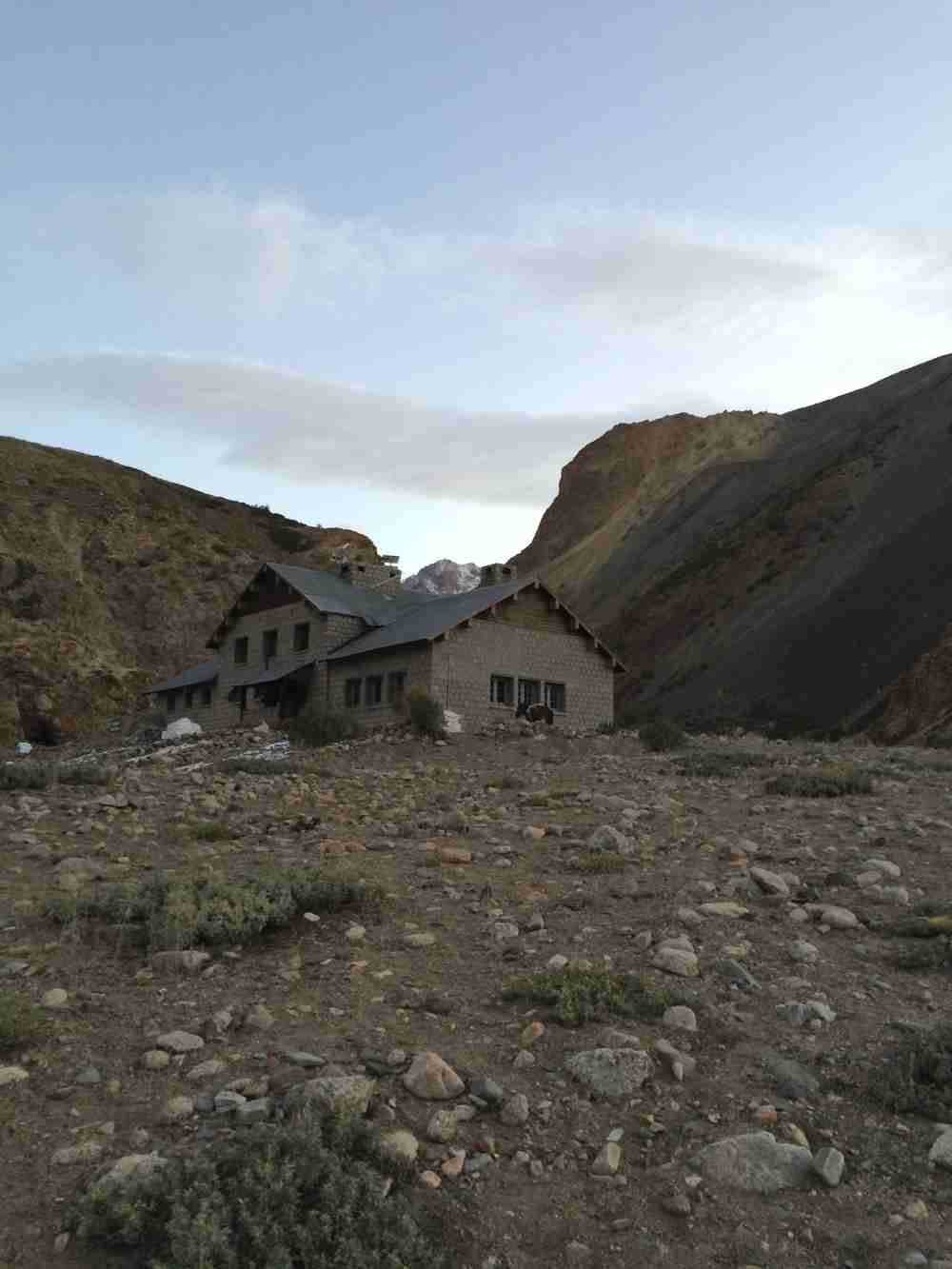 The Refugio Cruz de la Real is an army outpost manned by a garrison of about 6-8 young men in the summertime only. In the winter, the valley is covered in meters of snow. Interestingly, a “real” in Argentina is what we call a corral in the U.S. and Canada. The namesake for the Refugio is a large “real” used for centuries by the cattle drivers to contain the animals overnight. 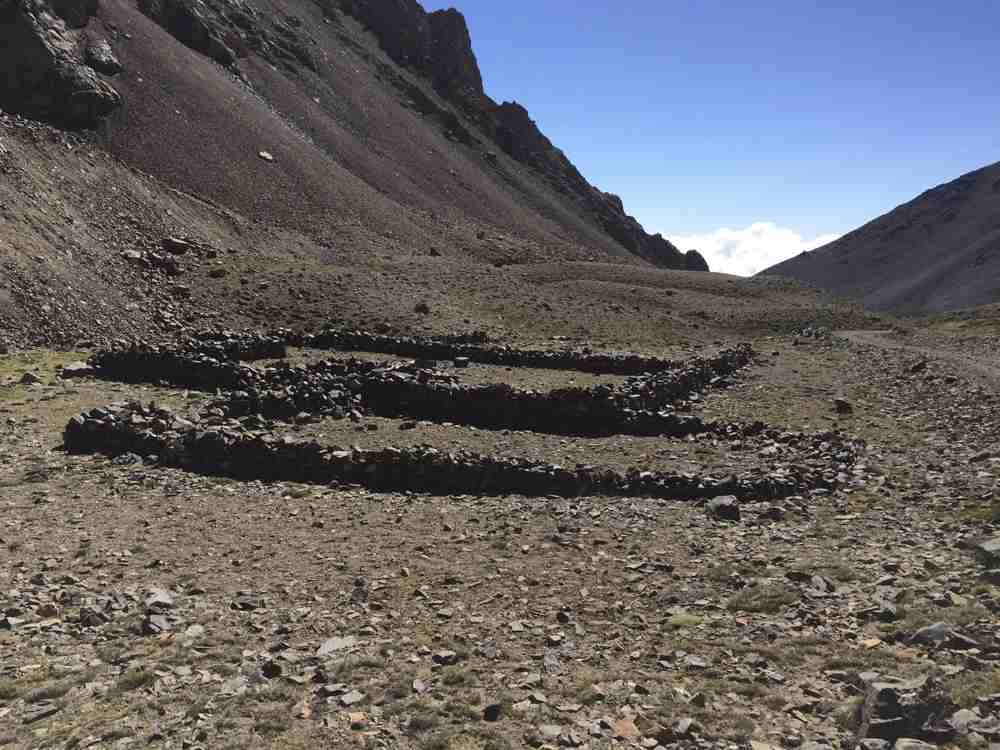 Right beside the ancient “real” now sits an army post, also called a refugio, a “refuge” as it were.   Open only in the summer months, it serves as an army outpost but also as a shelter for passersby like us – not that there are very many. Rent for the night is about $30 per person, and for that you get a hard cement floor, a picnic table with benches, and a real toilet. Forget the other stuff. Trust me, the toilet is worth an easy $30 after you’ve had your back end hanging out in sub-zero temps with freezing winds whipping by. 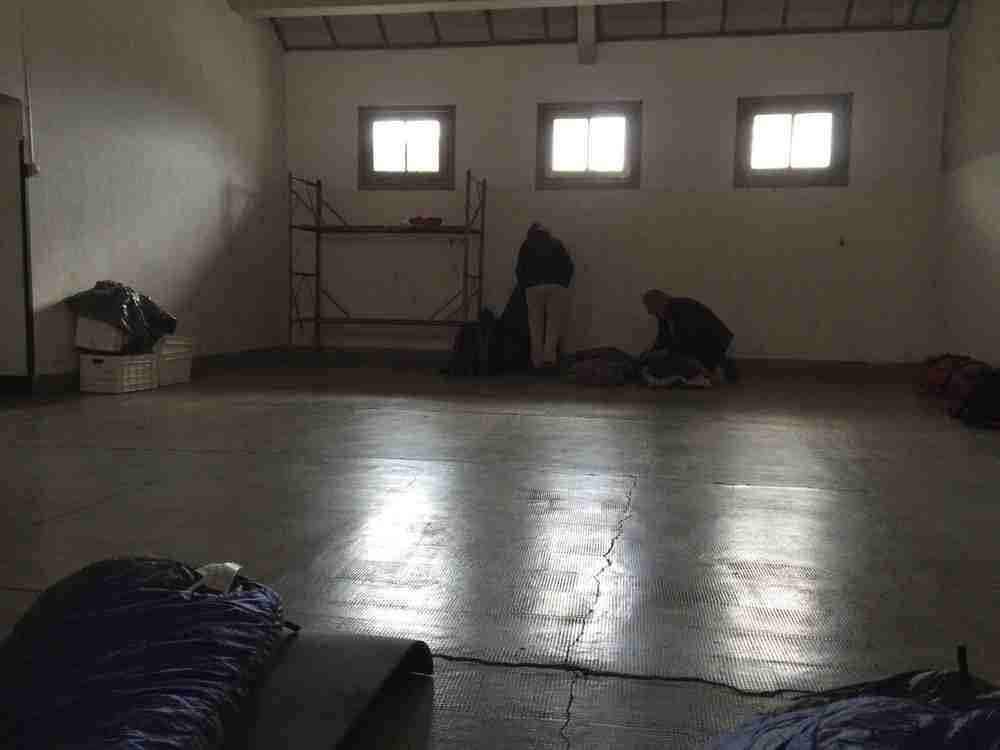 The luxury of cement floors in the Refugio

Dinner the first night was going to be empanadas and pizza, but in the end, I think all Janni made were the empanadas, which she brought out at about 6:00 P.M. Exhausted, we all crashed at about 7:00 P.M. 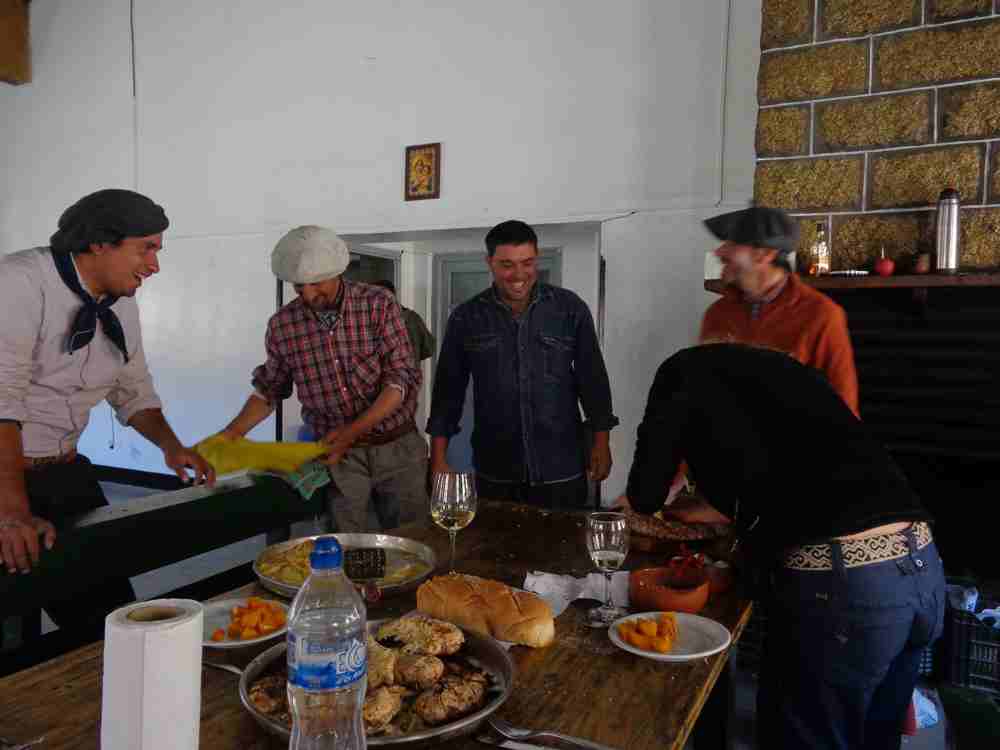 But then my stomach got the better of me and I arose at 8:30 for more dinner. Eric, a trail mate, also arrived in the common room for a snack about the same time.   They may have eaten pizza later, but by 9:00 I was back to bed, burrowed deep in my sleeping bag and fast asleep. So was Carol. 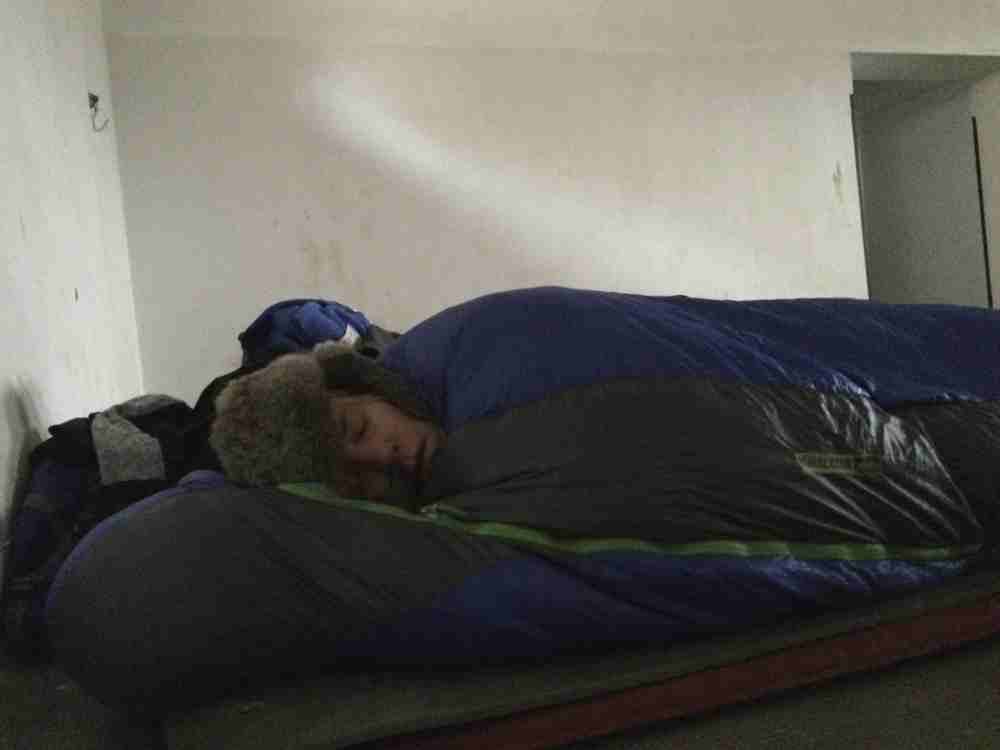 Carol fast asleep, hat and all

The next morning I woke with the predawn light and made my way outside to explore. The day was breaking behind the mountains, creating some impressive colors in the sky and on the face of the mountains. The monument to the real shone brightly with the painted white rocks, and the red clouds in the sky made a crimson halo around some nearby peaks. 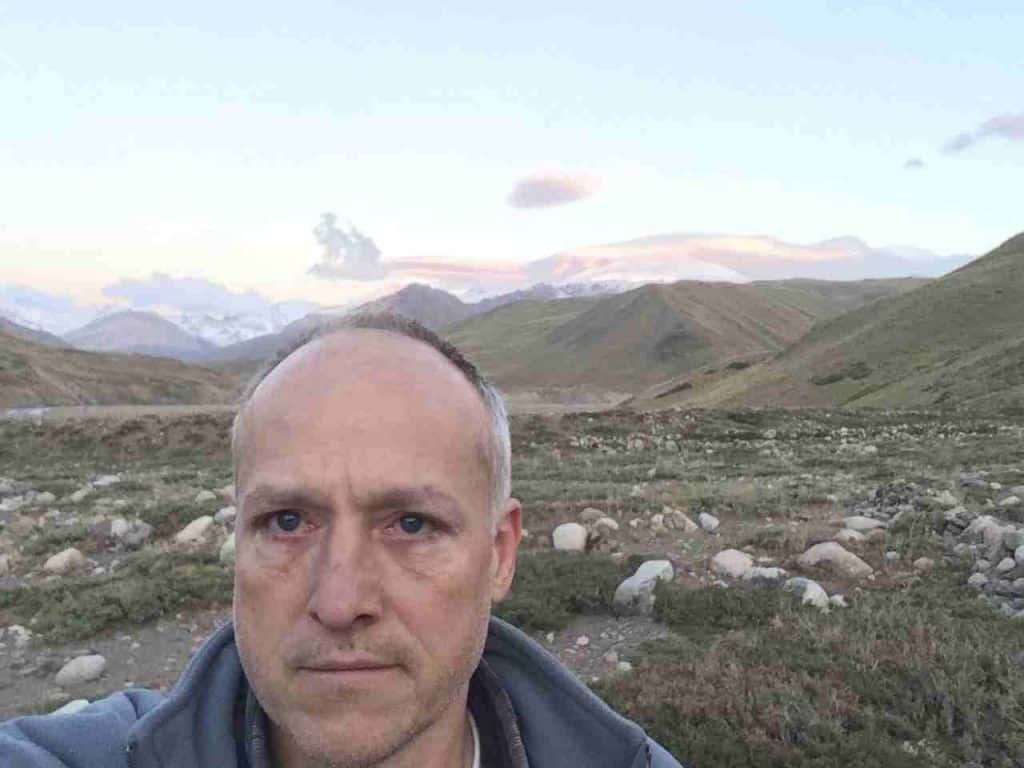 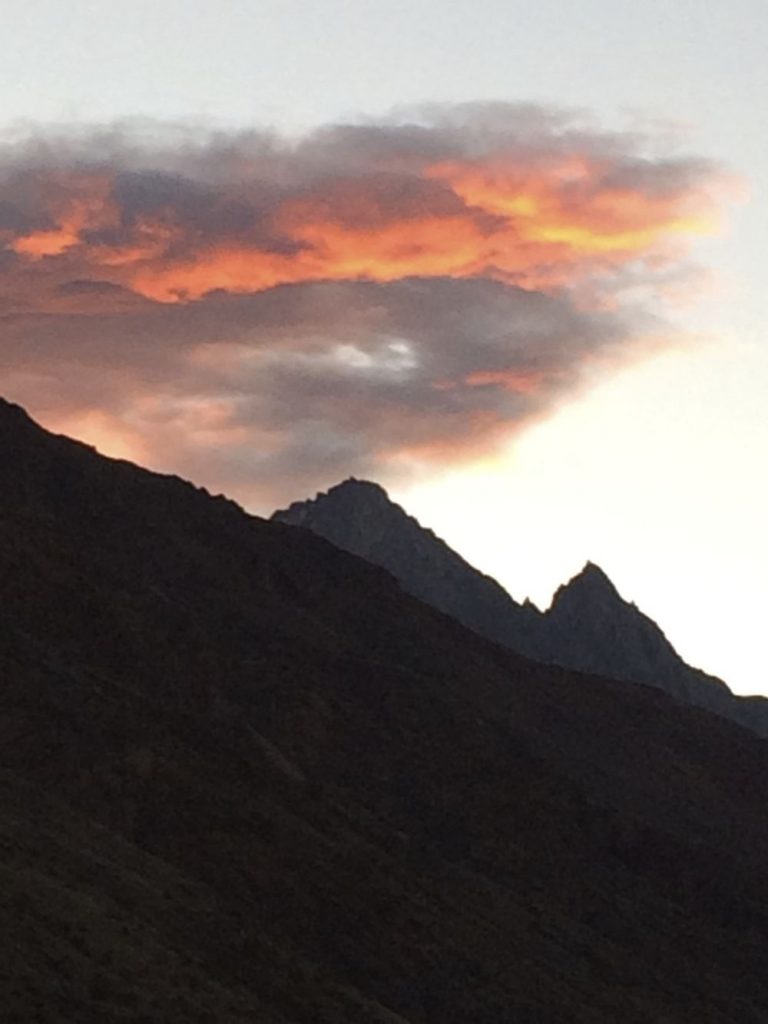 Up the valley to the north, the faces of the volcanoes and high ridges that were hidden by low snow clouds the day before now shown crystal clear in the morning sun. The cloud crown on the volcano indicated continued low pressure and possible storms later in the day. A good day to stay in the valley and explore the tumbled rocks and incredible geology on display. 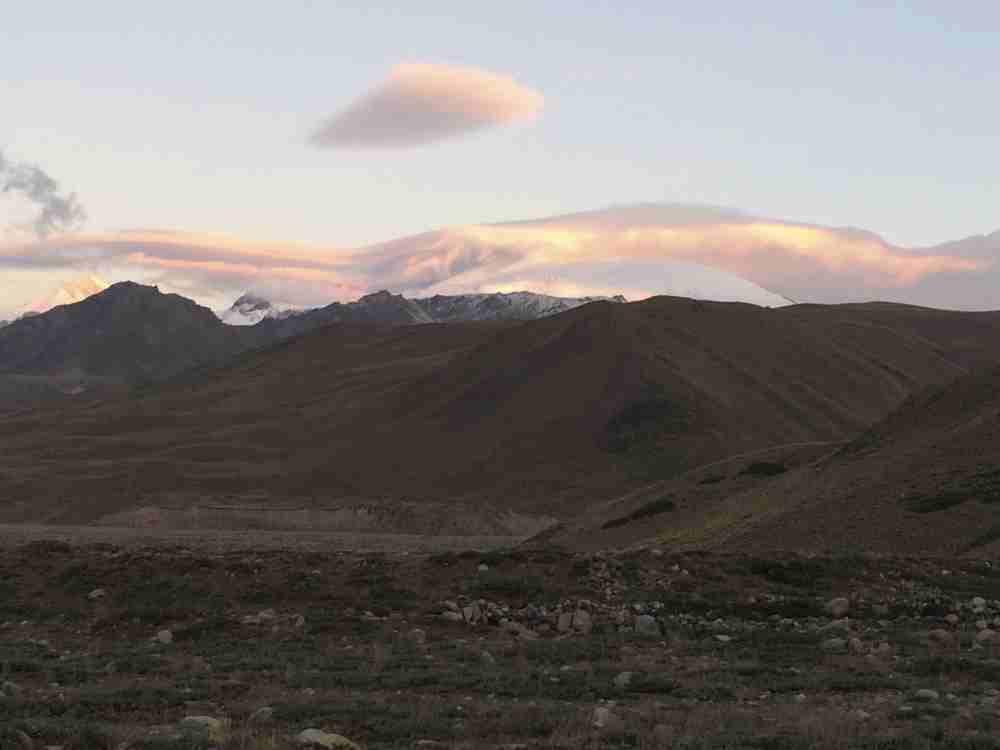 After a great breakfast of eggs, bacon, toast, coffee, and mate, Edgardo and Johnny went to the real, where our horses had spent the night. 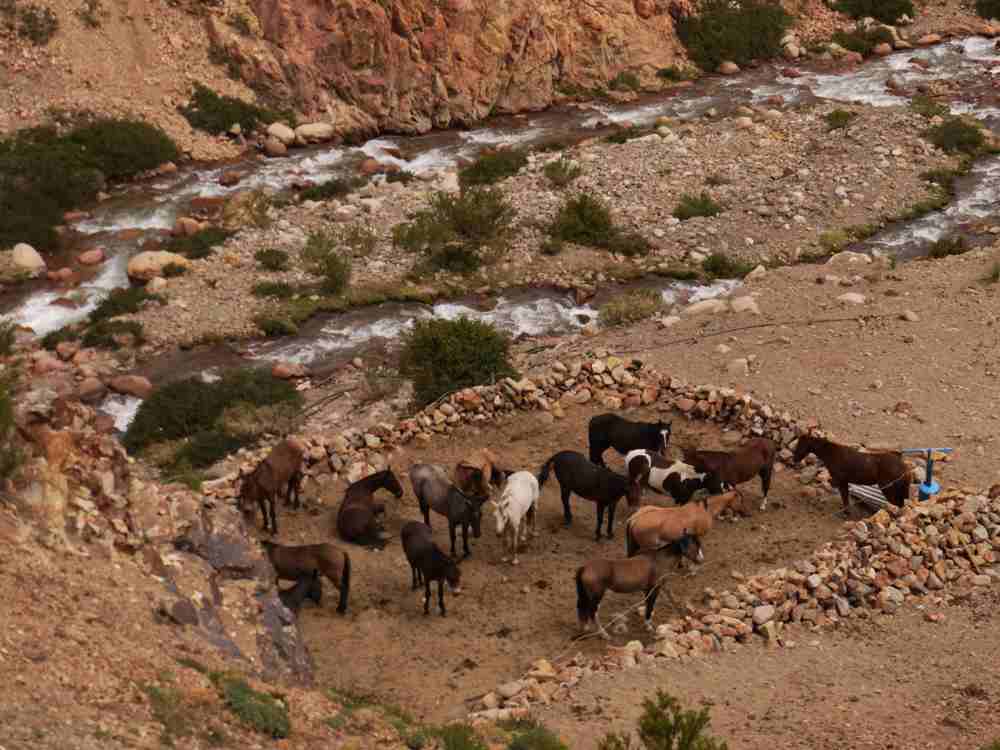 Our horses in the real

They prepared the horses to get us across the stream, now too high to wade. Then Edgardo and Johnny were off to forage far downstream for some dry shrubs to burn in the outdoor fireplace, to heat water for the showers. Apparently it also creates smoke to dry meats. More on that later.

After getting across the stream, we ditched the horses and hiked a few miles to see some lagoons along the base of the ridge that are home to tiny frogs, ducks, and a host of water flowers and grasses. The water is a weird color of blue, and the vivid greens of the grasses and water plants is startling against the rocky backdrop of reds, yellows, and browns of the cliffs and valley floor. 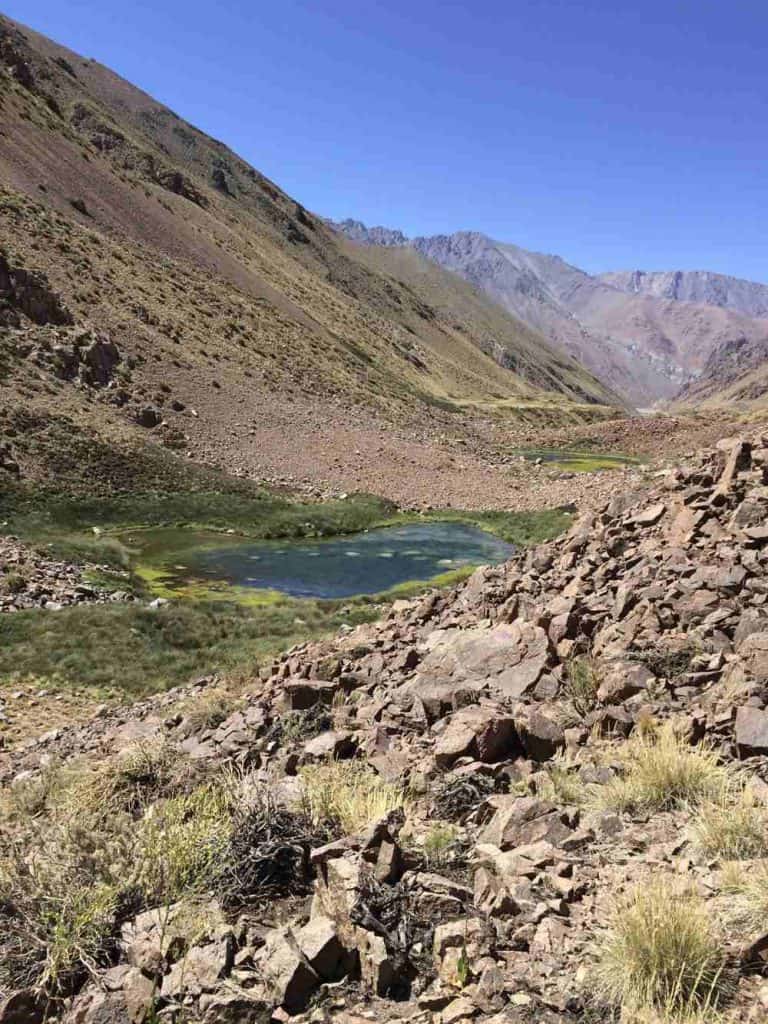 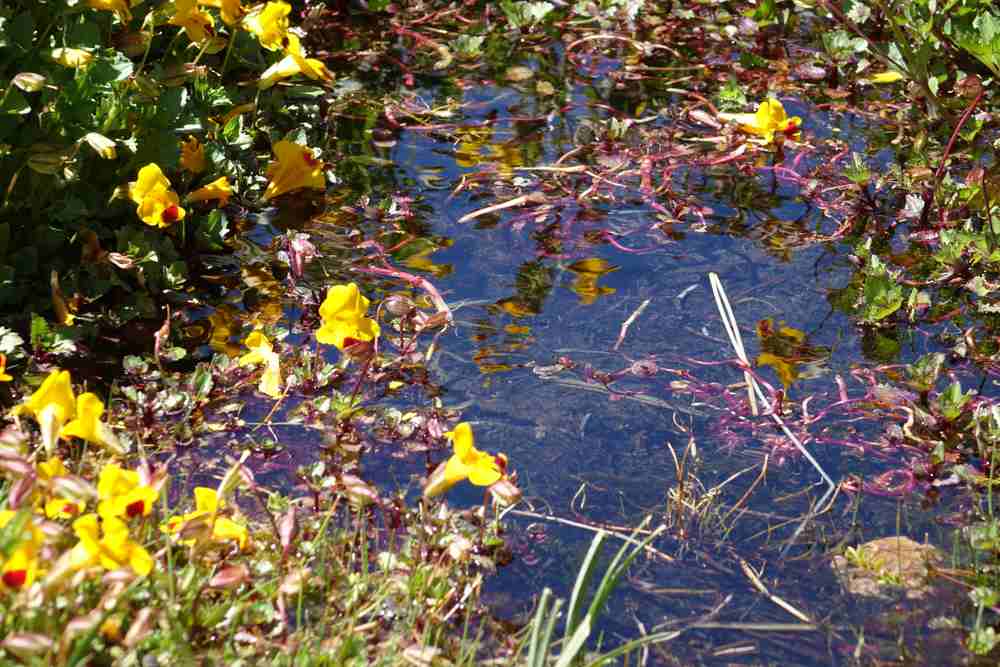 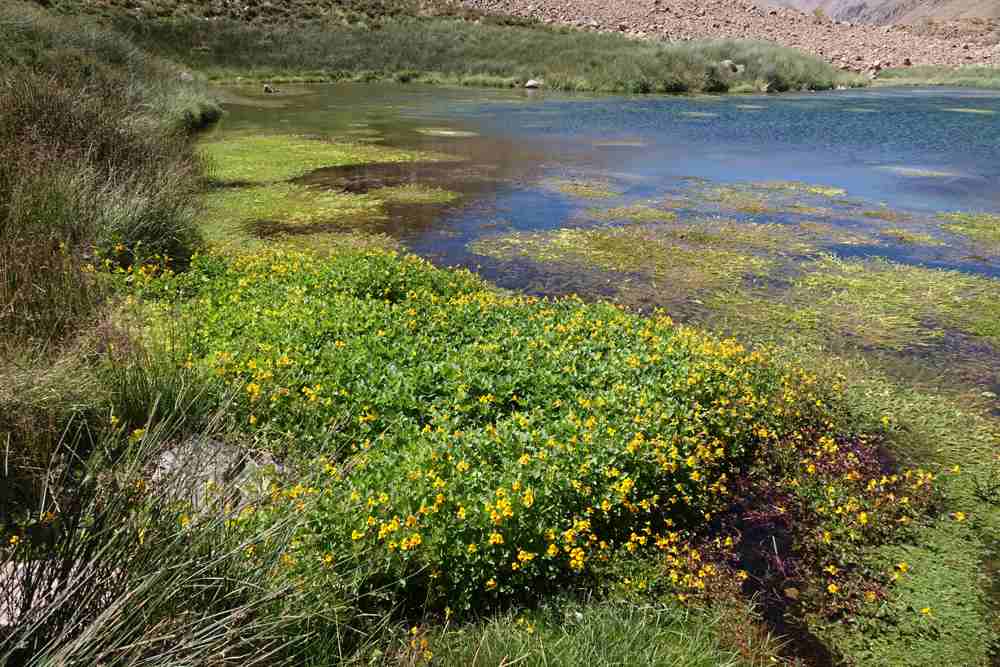 The stark beauty of the valley is incredible. Stunted plants and trees 100+ years old are no bigger than a small bush in most parts of the world. Yet life hangs on anywhere it can and adapts to the circumstances. 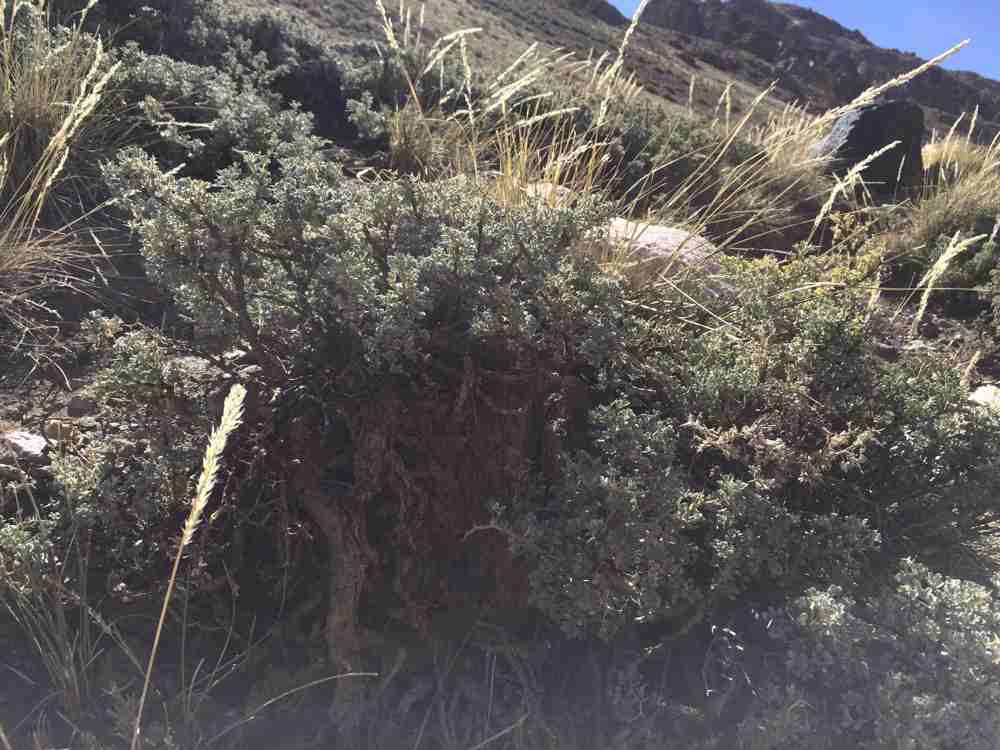 On the way back to camp, I once again tried my hand at panning for either gold, copper, or lapis lazuli. No big find. Oh well. The fun is in the panning and the hope, or at least it should be. 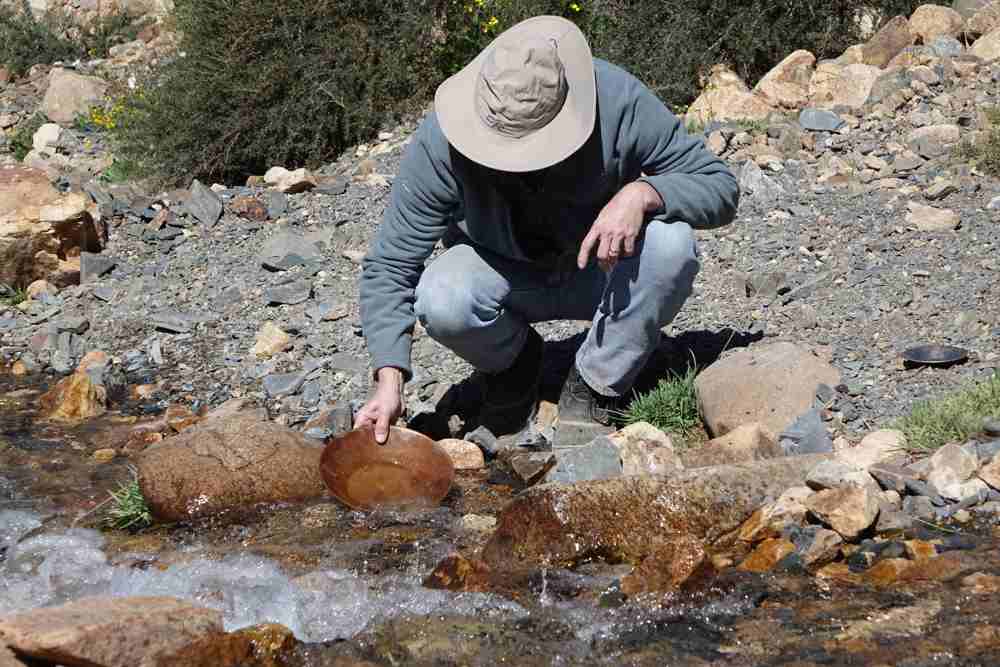 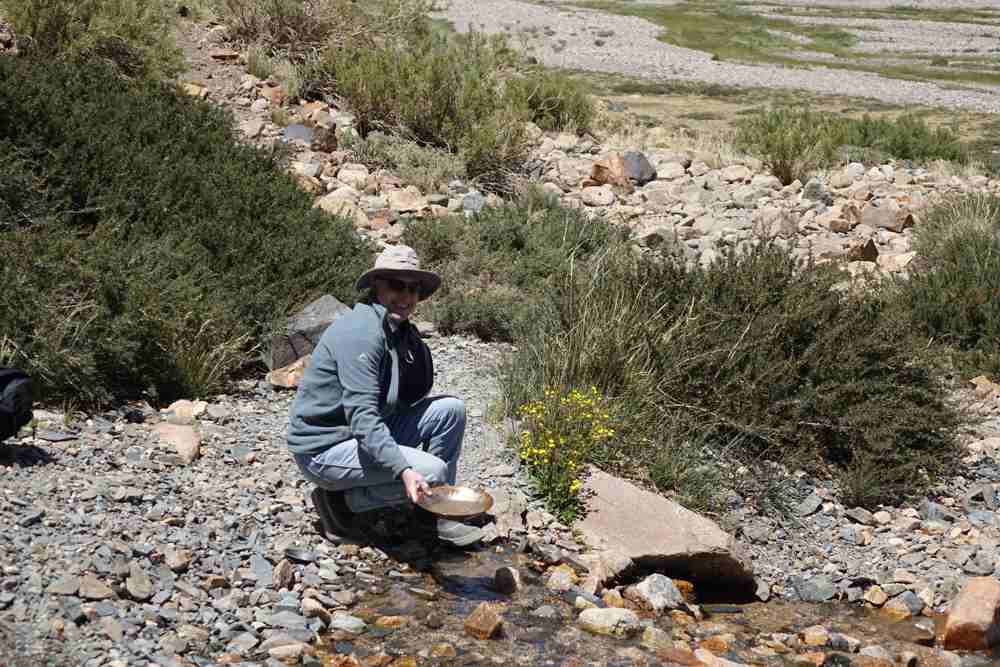 After a few pans, it was time to head back to camp and enjoy a leisurely afternoon talking with our fellow travelers in the warm sun. While we were sitting outside, the Argentinian flag broke free of its pole and began to blow away. It was quickly rescued and passed along to the army folks, where it was re-hoisted to fly again over the valley. But while it was down, Eric and I took turns holding it up for photos. Eric also took a picture of me wearing his present to me: a “do rag.” He got me sculls and crossbones. 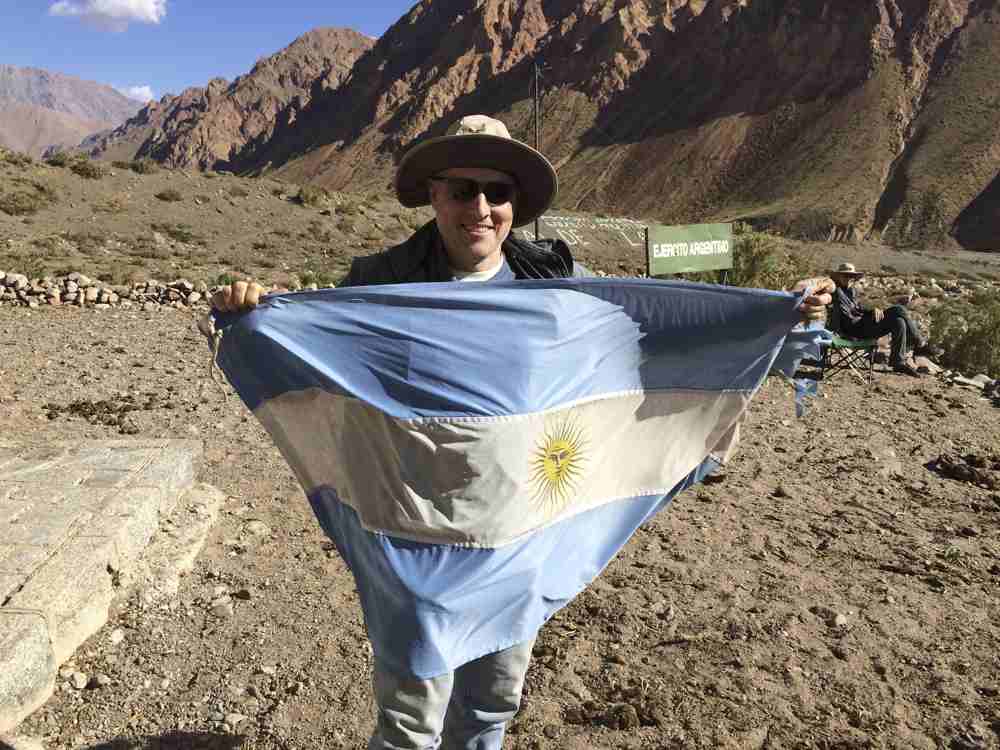 The loose Argentinian flag rescued from the wind 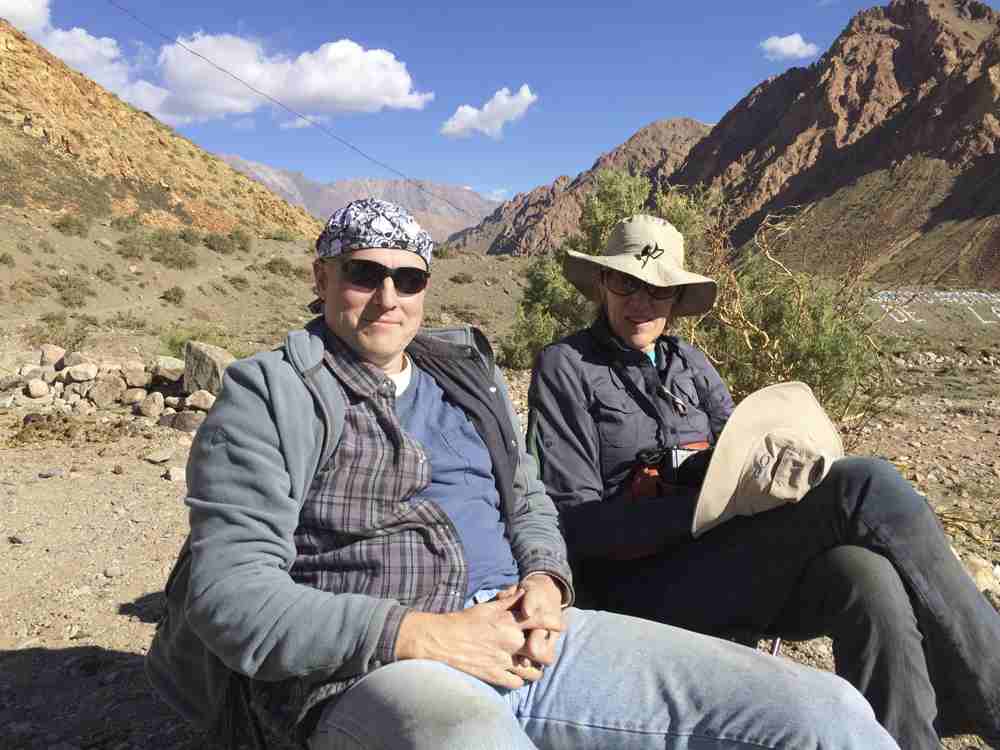 The refugio is an interesting place. A refuge and outpost at the edge of civilization. In fact, really an outpost outside civilization. Only open for about 10 weeks per year, the soldiers manning the place arrive in January and depart in March. Most of the rest of the year, this place is under meters of snow. 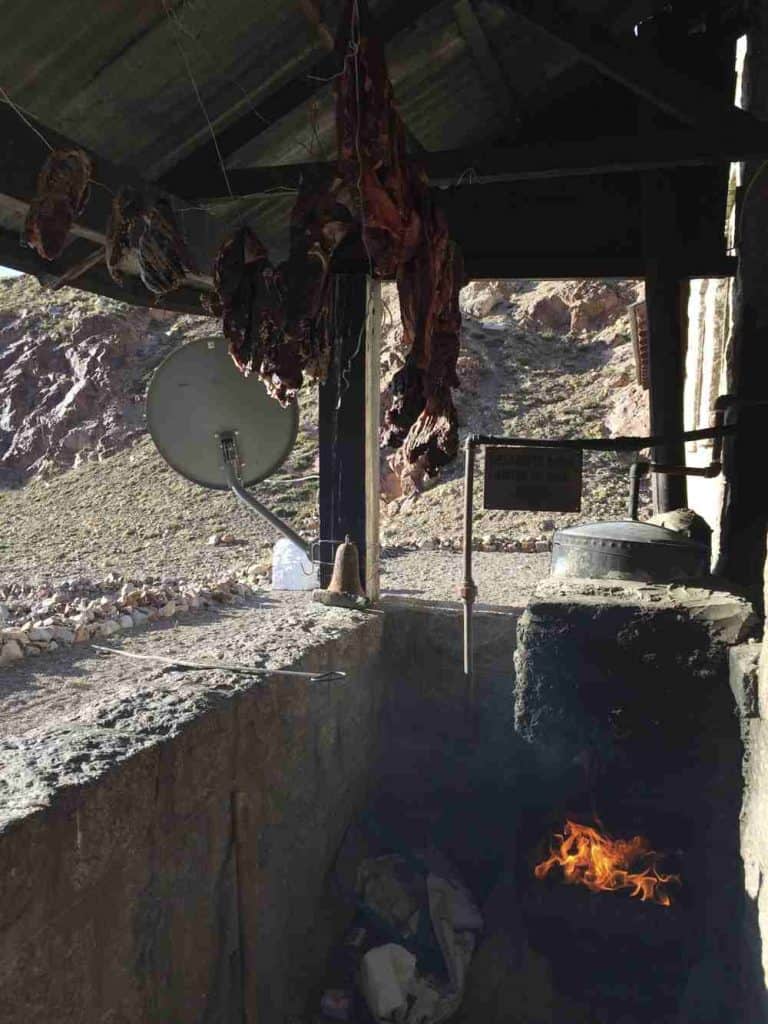 This picture is fun because we have an ancient wood stove, burning brush actually, smoking meats turning into jerky along with a satellite dish to bring in the latest movies for the army guys. I could not get the solar cells on the roof in the same shot, but the juxtaposition of the various elements is fantastic. Water comes from the stream via 3” black conduit pipes run into the refugio and auxiliary power at night from a small generator hook up that would make OSHA and UL cringe. But it works.

After a restful day, Janni prepared a fine dinner. Well rested and refreshed by a day out of the saddle, the table is set and merrymaking begins. The evening begins early and then ends early, for tomorrow we ride at sunrise to cross the river when it is at its lowest. Overnight the temperatures plunge and the melting of the glaciers and snow ceases. The river flow slows and early morning is the only time it is shallow enough to cross safely. So an early dinner it was, and then off to bed to rest up for another long day climbing up out of the valley to the base of the next pass. 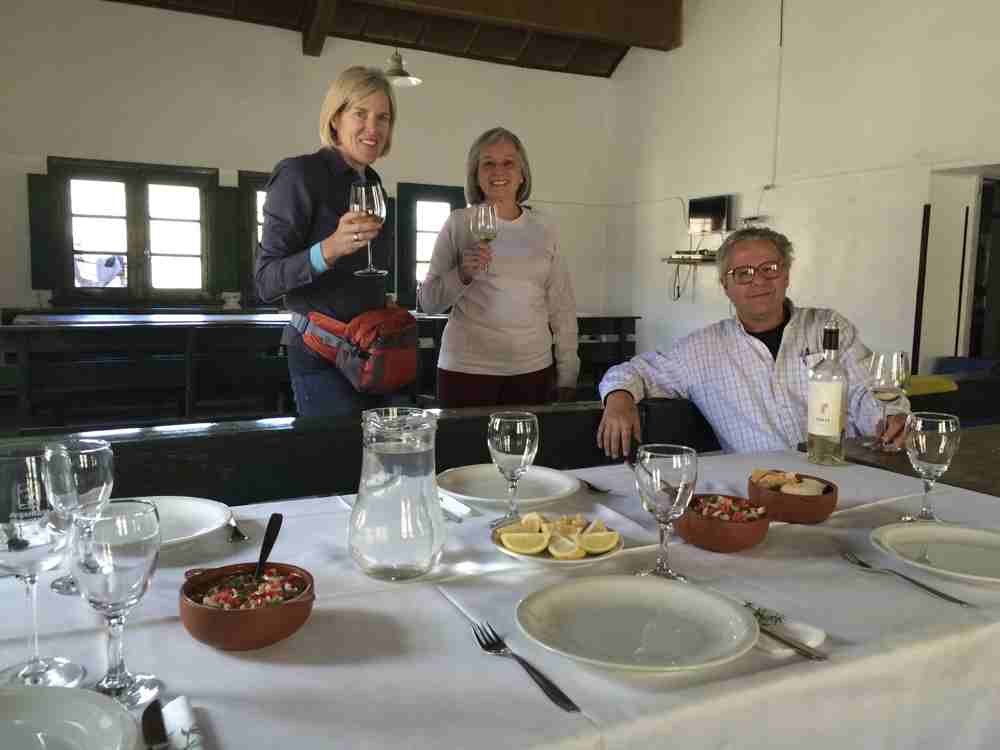 Relaxing before a great dinner