Up and Out of the Valley - Escape Artist

The sun is up before 7, but you can’t see it due to the high walls of the canyon. The light is diffuse and the air is crisp until the rays of the sun can warm it up a bit. After a hearty breakfast of eggs, bacon, potatoes, toast, jam and, yes, mate, we are packing up to get a move on. Our team prepares the horses and pack mules, and we saddle up rested and ready for a day on the trail. It’s a lot to pack up, but self sufficiency is key in these parts. Everything from large knives to extra spurs; if you find that you need it, you better have it with you. 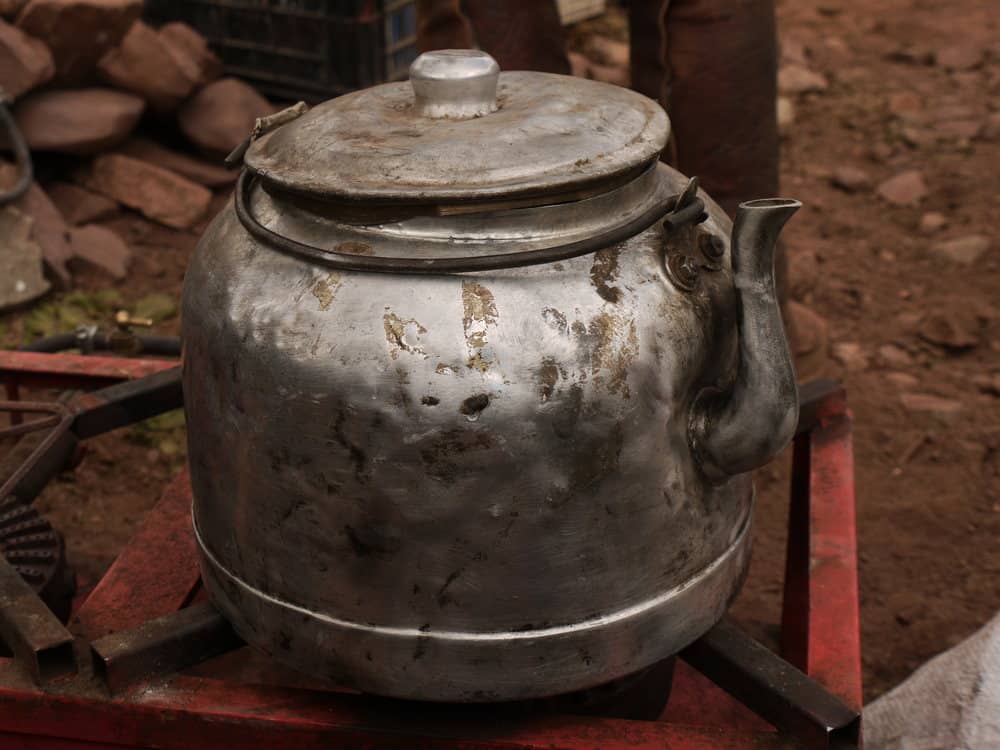 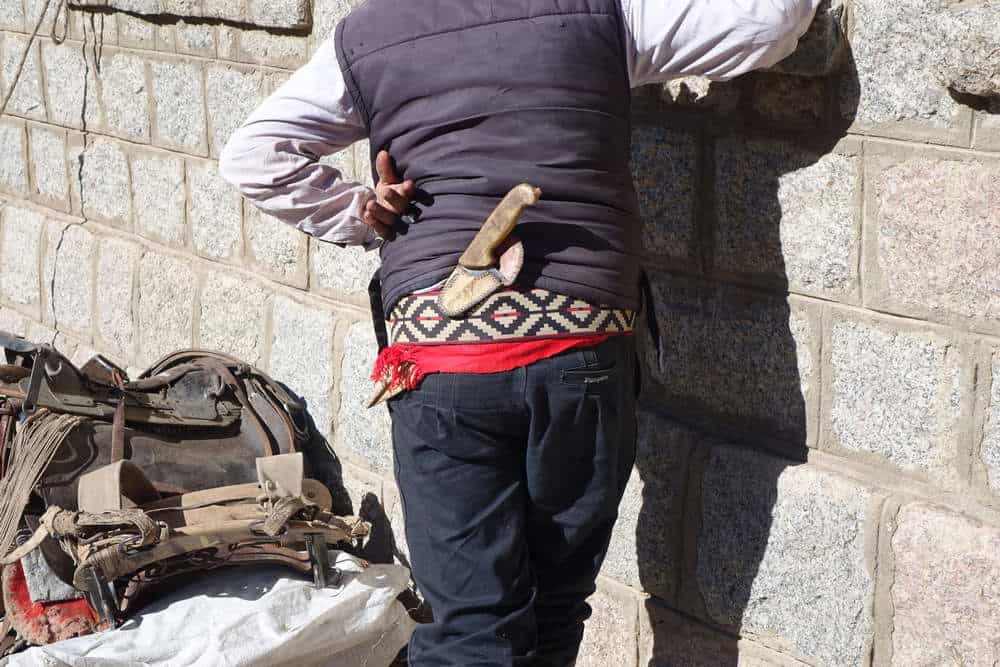 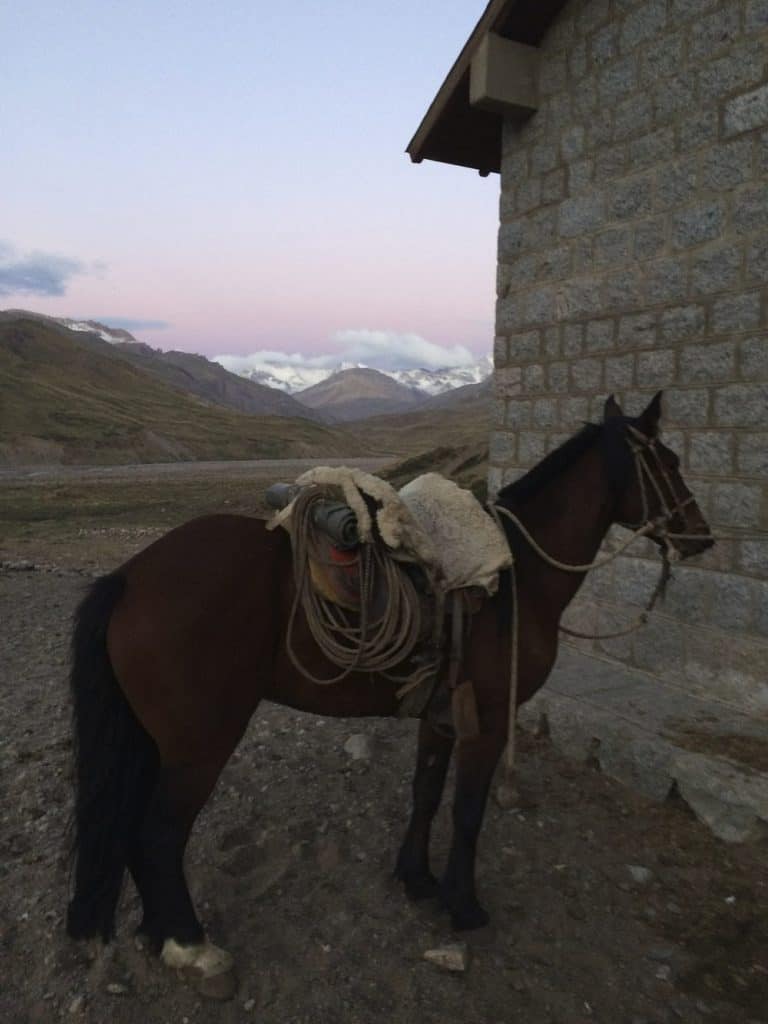 Mounting up at dawn for river crossing

The sun is reaching the peaks and walls of the easterly facing mountains. More importantly, the snowmelt grows stronger with each passing moment, swelling the river we’ll have to cross on horseback before it gets too high. First, we head upstream to the crossing point and find the water levels low enough to cross. 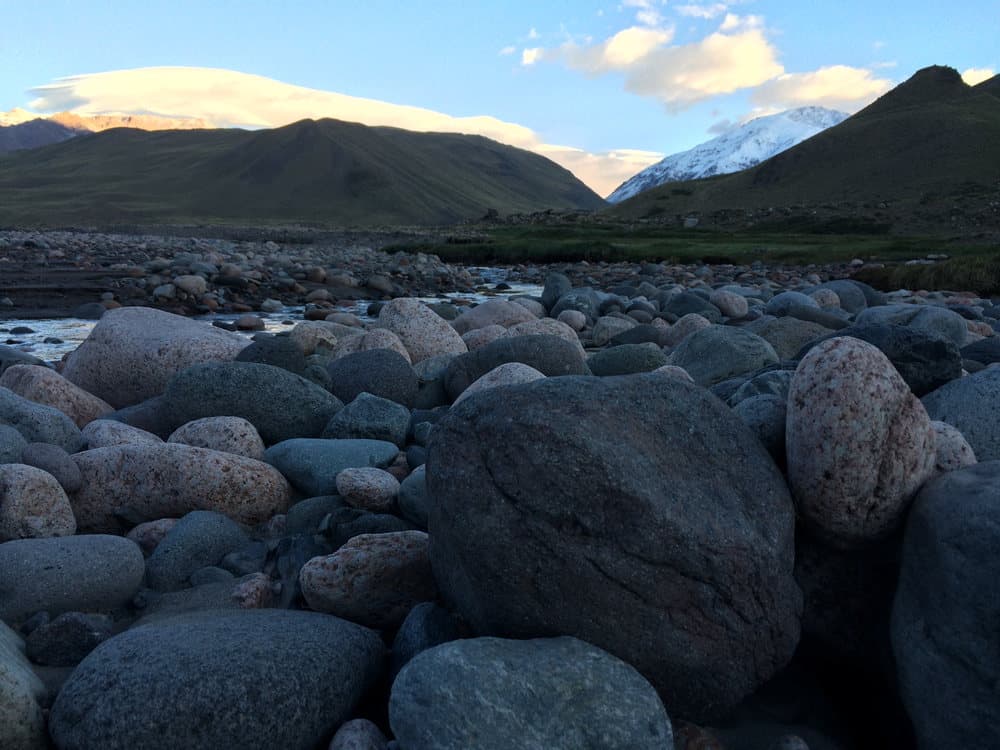 After a fairly easy crossing (for the rider), we pick our way across the boulder-strewn valley and up a western tributary toward the next high pass and the Chilean border along the ridge line. We can see the peaks off in the distance, but it is hard to imagine that we will be at its base by nightfall to camp. 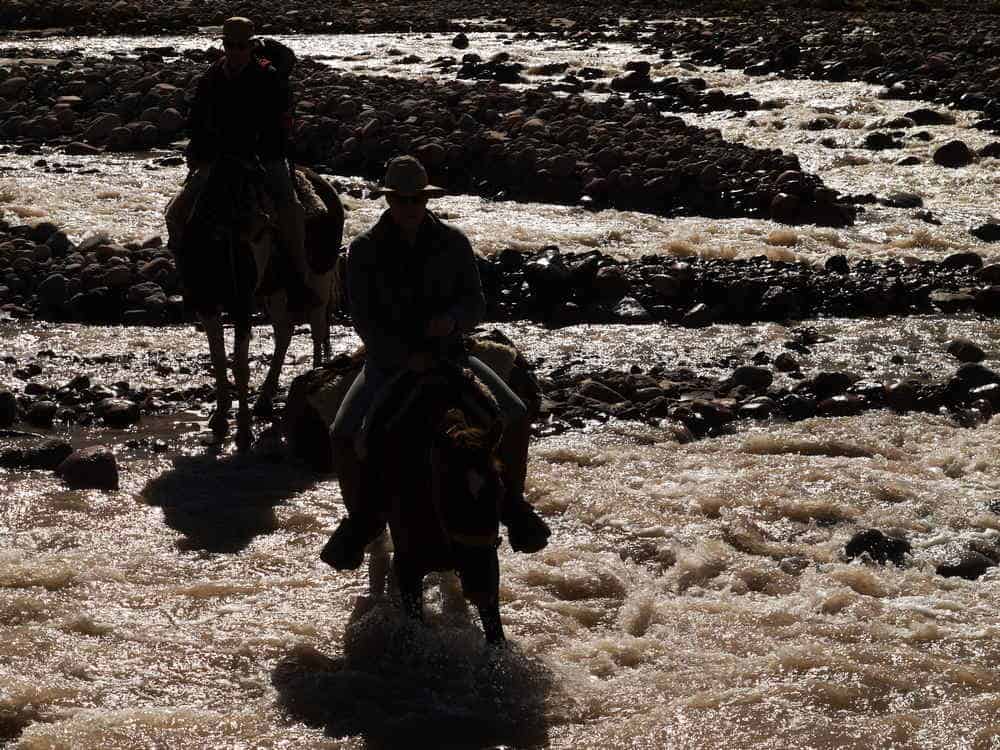 The ride up and out of the valley takes us across the first grassy meadow we’ve seen. It is here we pass a hiker. Yes, you read that right. A hiker, alone walking the trail and heading the way we came. He’s the fourth person we’ve seen in 3 days, apart from the soldiers at the refugio. I should have snapped a picture of him, but I didn’t think of it at the time.

My hat is off to this intrepid hiker. It’s a long, lonely trail, and he’s seeing every bit of it up close and at slow speed. 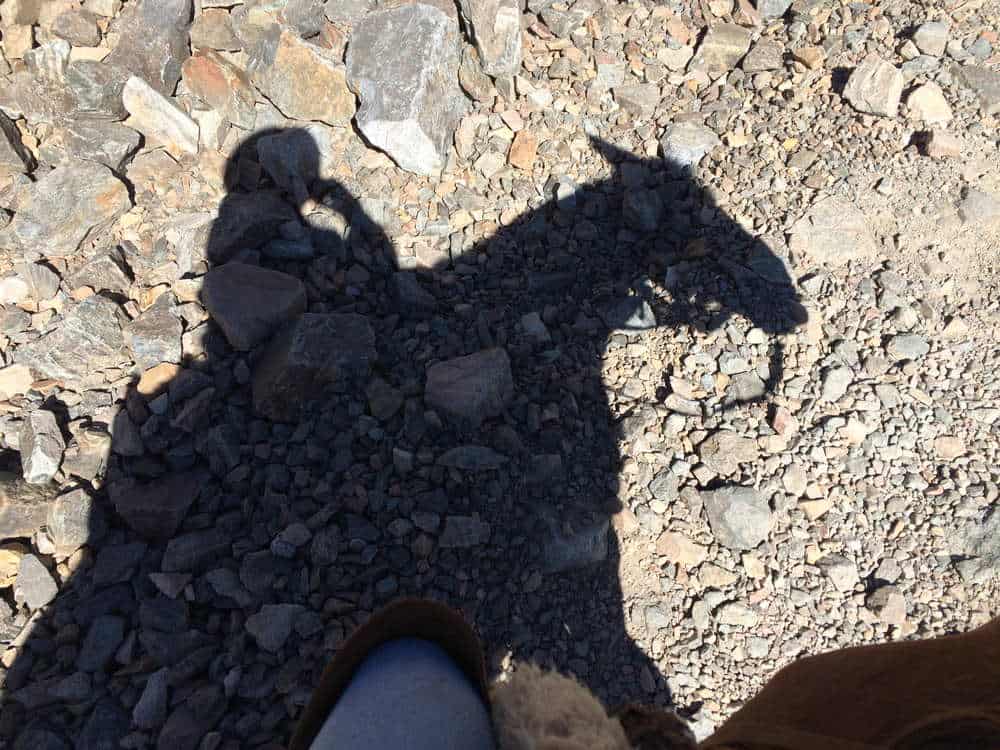 The rock formations coming up from the bottom of the valley are spectacular. There’s just enough moisture seeping from the formations to let the plants grow, creating a colorful slide of beauty that is awe inspiring.

Very shortly after, however, the new canyon we are traversing changes over to a spectacular red sandstone cliff formation. There are a few waterfalls coming off the sides and caves cut back into it by wind and water over the eons. The wind carvings are incredible when you think of the time it must take to blow sand long enough to cut away the rock face. 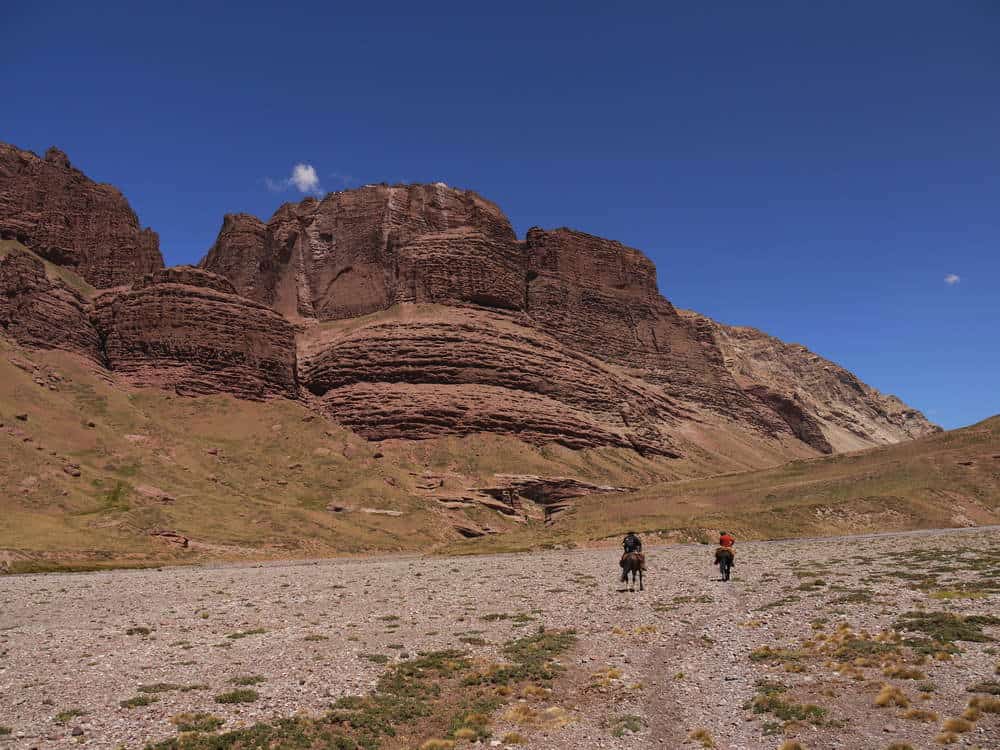 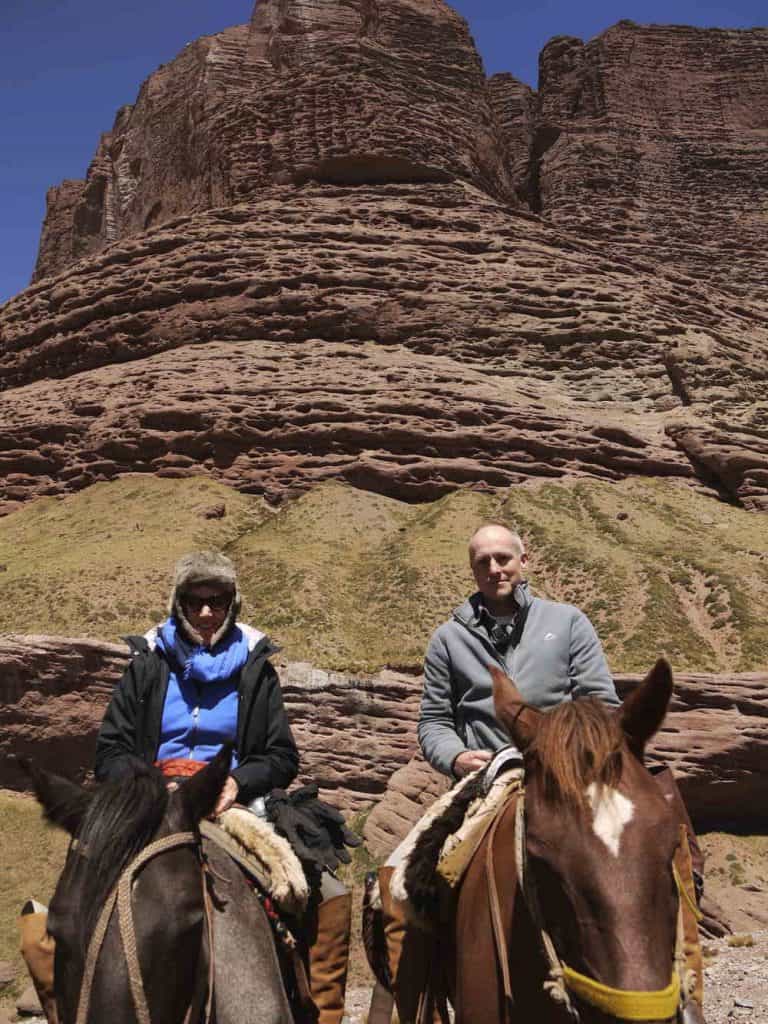 Time is both immediate and endless in this part of the world. There are no real measures of time other than the clip clop of the horses’ feet, a twang in the stomach for lunch, and the movement of the sun across the blue, blue sky.

These seemingly contradictory terms spin in my head. Timeless and timely. Immediate and endless. These terms weave themselves into a reality so deep and profound that no words can describe them. The expansiveness of the space, the silence that grips you, the scale and scope of the mountainous features that dwarf any human presence give pause to anyone with a soul. 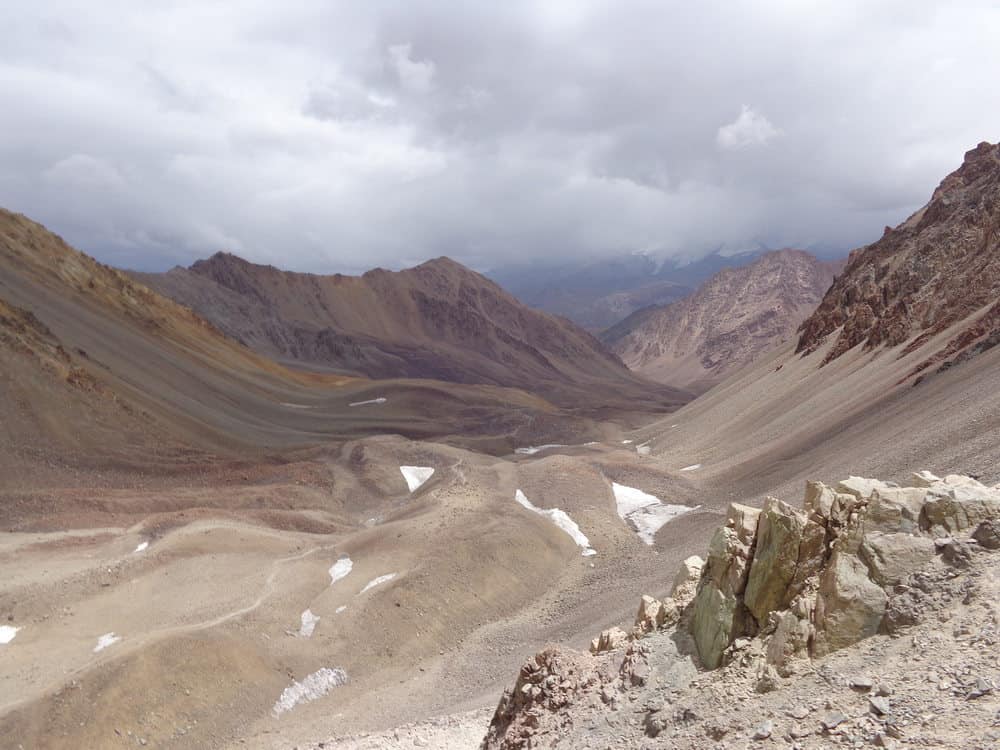 Before we set out on this adventure, Carol had wondered about being bored. Riding a horse through seemingly empty high desert for 5 days could appear on the surface to be boring. But as a person who’s spent countless hours in the woods playing, hunting, and fishing, I knew from experience that boredom would not be an issue. I assured her that she would be anything but. Serious drop offs into canyons also help keep the boredom at bay. 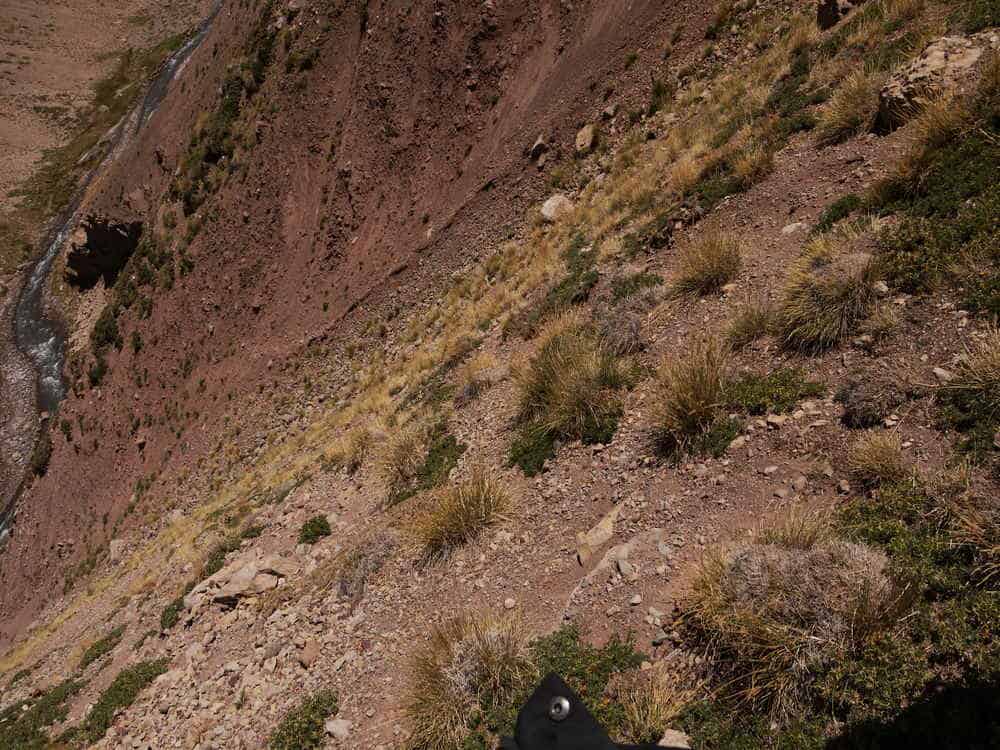 Nor would loneliness be a concern. The Fisherman’s Creed speaks to a great truth about being out in nature. I don’t remember the whole thing; in fact I only remember 3 words of the poem. It’s the part that promises, “Solitude without loneliness.”

Truer words could not be spoken about being in the wild. Especially in the high desert with 100-mile vistas only interrupted by snowcapped mountains. Plenty of solitude. Zero loneliness. Plus some excitement! 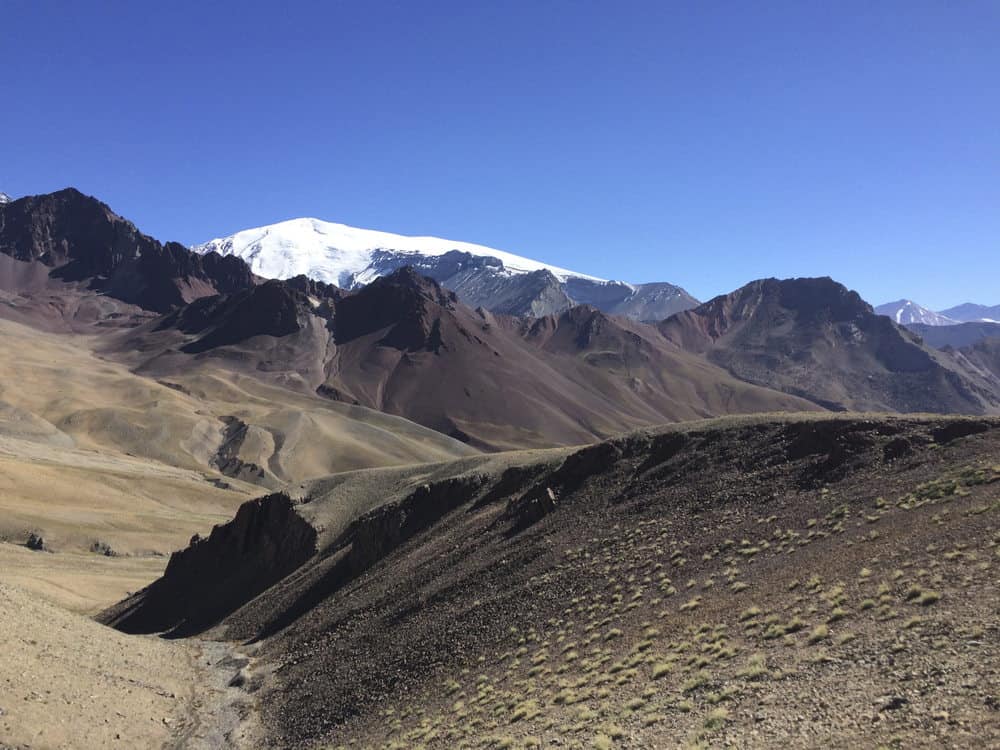 As we neared our next campsite, the mule train caught up with us – with Jani at the lead. She is a real cowgirl and made a show of it by rounding up the break-away mule. 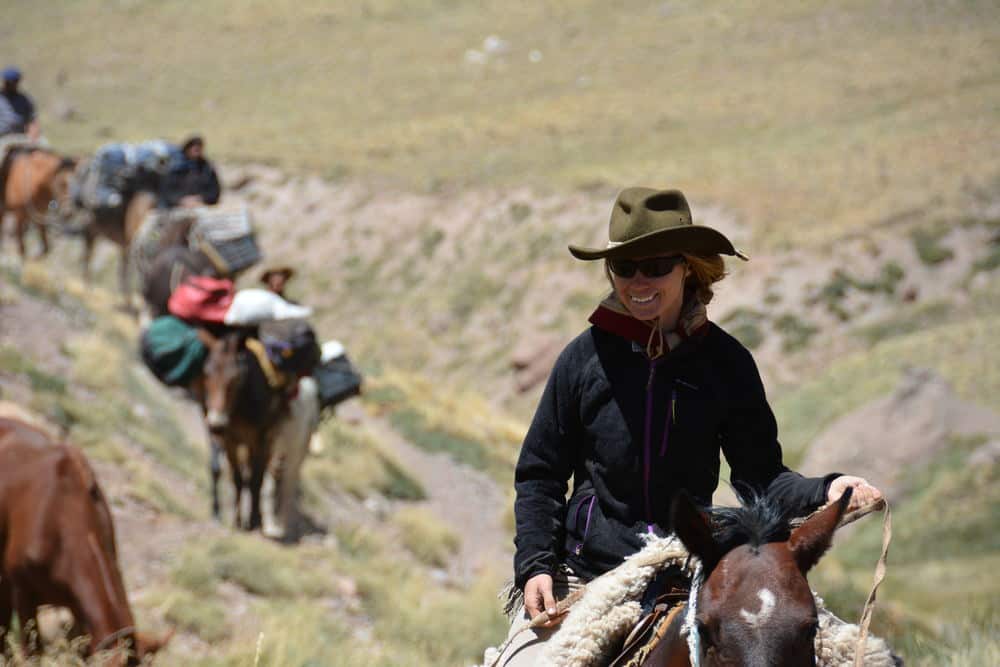 Jani, our chef, and the mule train

While we waited for them to pass on the narrow trail, we took a break to water our horses. I found some flowers to admire along a small creek coming down the mountain. Even here, where most of the space is desolate rock, sand, and clay, patches of color come to life and jump out brightly in contrast to the whites, browns, and grays of everything else. 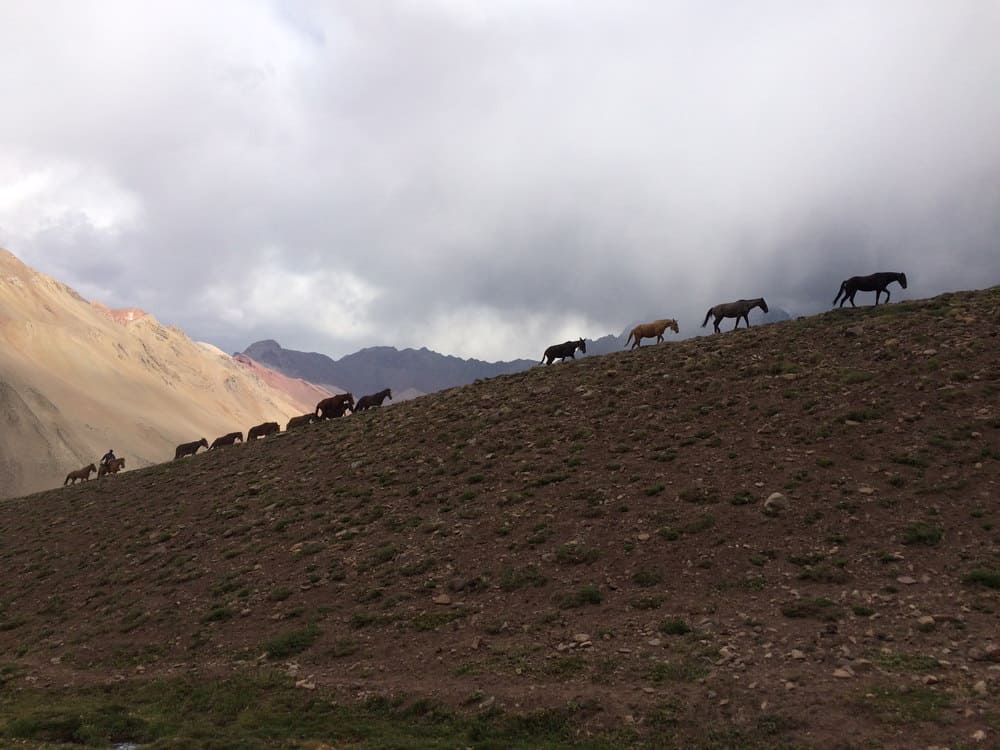 Putting the horses out for the night

With some weather rolling in, we decide to jump in and help pitch the tents alongside Rolo and his team. I’m not sure that we were that much help, but sometimes it’s the effort that counts.

As it was, the skies were looking like a storm so we also built wind and rain blocks along the north sides of the fire pit for cooking. Tents went up, secured by large rocks, and we adjourned inside for tea while the hail stones beat a rhythm on our shelter. 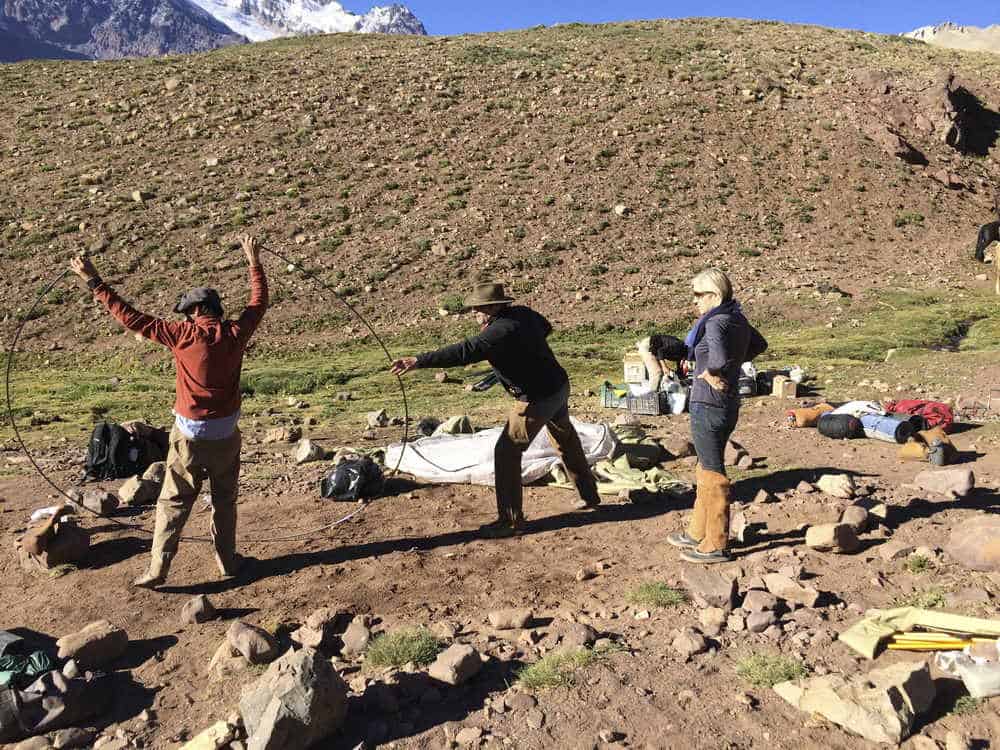 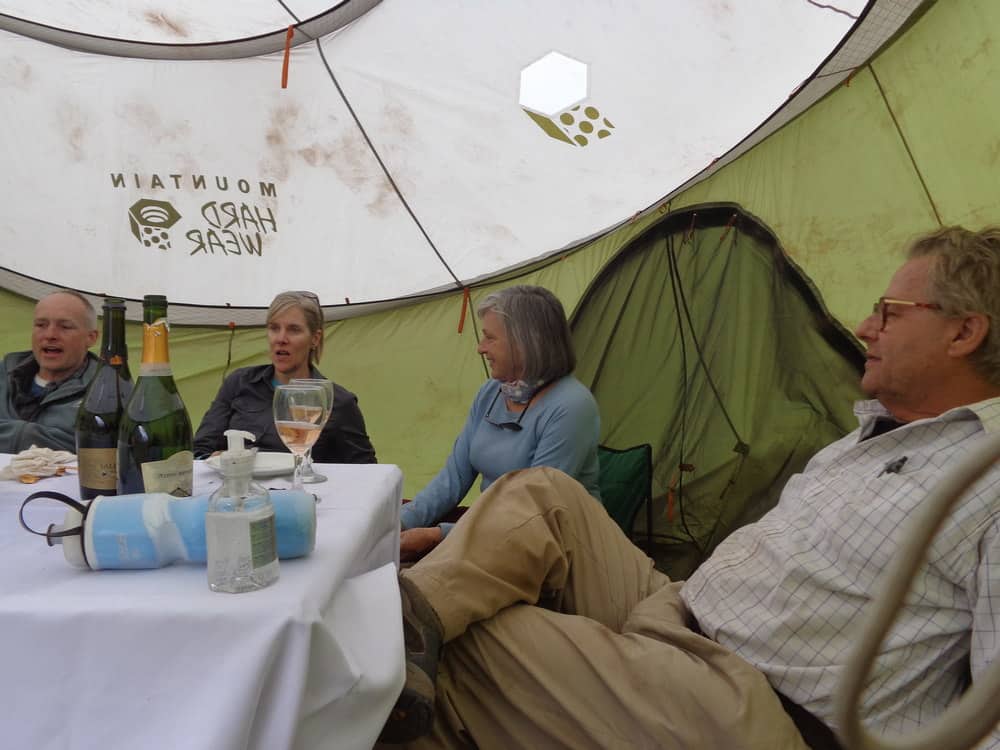 Later that evening after the storm had passed, the team took the horses up the hill to pasture in a green meadow for the night

For dinner, Jani made us a stew in a pumpkin. Fresh vegetables, meat, and sauces were placed in a few pumpkins and set in the coals of the fire for a couple hours. This is a special way to cook in bad weather, because the heat bakes the food inside the “pot” and you can keep the fire going – moving coals to areas that needed heat. But you’ve got to remember the pumpkin, of course. 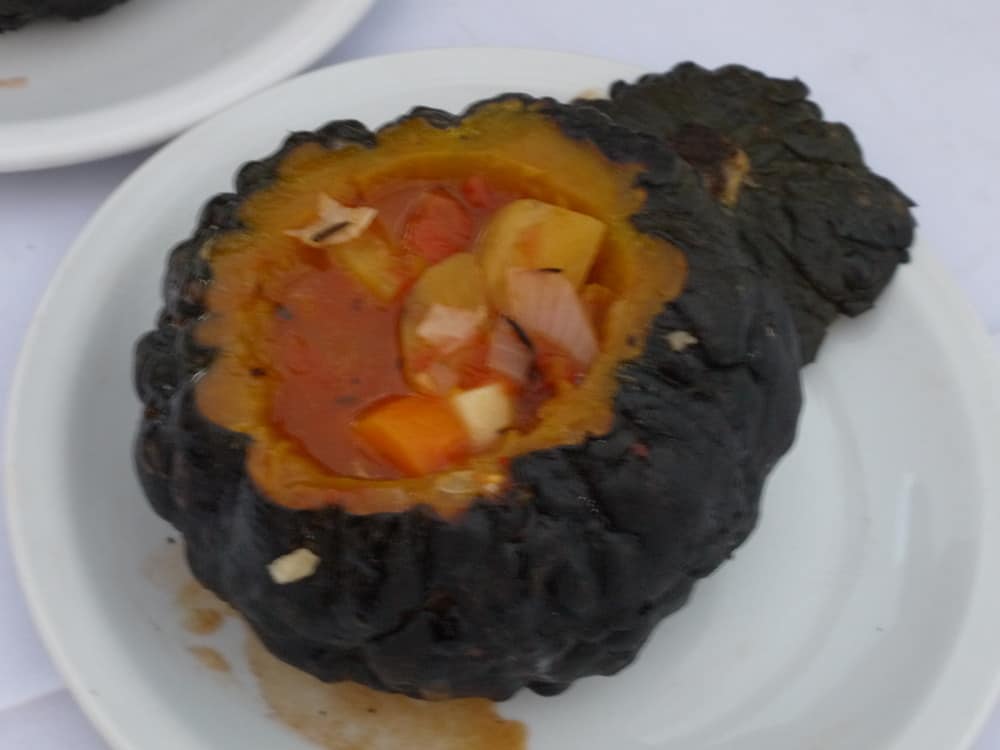 Dinner in a pumkin

After dinner, we sat and enjoyed our final evening in the mountains. Tomorrow we would make the steep climb to the Chilean border and down the other side to the pick-up near some hot springs and a glacial lake. Lingering longer after dinner than usual, we enjoyed some political discussions in the tent, philosophized deeply, and really drank in the event in which we were fully engaged. 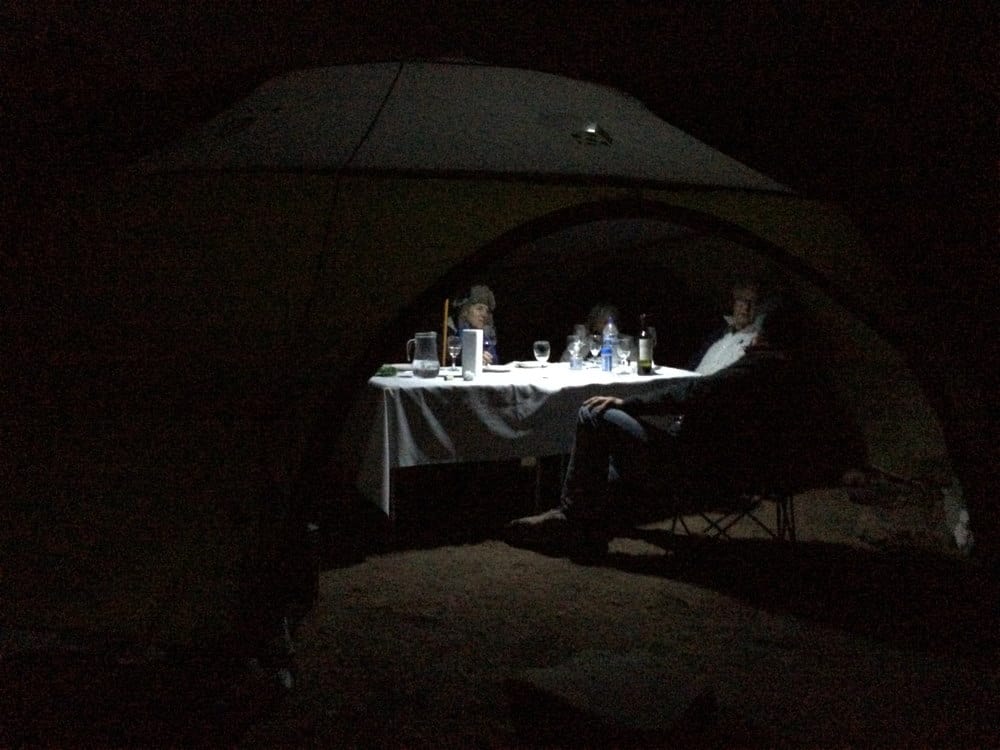 On an annual basis, the people making this trek number under 100. In the past centuries, gauchos drove tens of thousands of cows over the passes to market, but the number of gauchos, while not known, was likely in the tens or teens each year.

To pass through this space, a place so infrequently traveled by other people, is special and unique. It’s an experience remote, vast, and intimate all at the same time. Life changing in subtle ways that truly escape words. Pausing on our last night to reflect on this experience and recognize the deep gratitude for the opportunity rounds out the days on the trail. For tomorrow we head out and back to the “real world” – whatever that means.

Why You Should Buy Travel Insurance Online