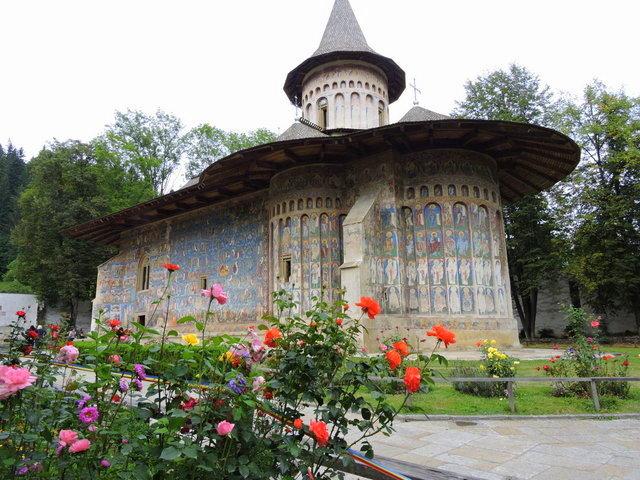 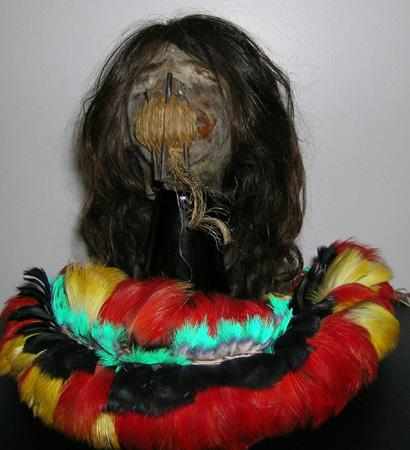 What might these two photos have in common?  First is the Painted Monastery of Voronet, tucked away in the Carpathian Mountains of Romania.

Next is a tsantsa, a human shrunken head, made by the Shuara Jivaros in the Amazon jungles of Ecuador, the first tribe I ever lived with.  This particular tsantsa was given to me by Chief Tangamashi when he adopted me into his clan in the summer of 1960. I was all by myself and 16 years old. 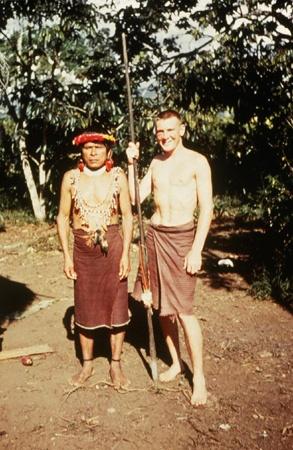 Let’s start with the Painted Monastery.

Built and painted in 1488, Voronet is an apotheosis of devotion to the story of Christianity. The frescoes, with the famous “Voronet blue” made of crushed lapis lazuli, have withstood over 500 winters of wind, snow, and rain.  The extraordinary back panel of the Last Judgment is renowned as “the Sistine Chapel of the East” — 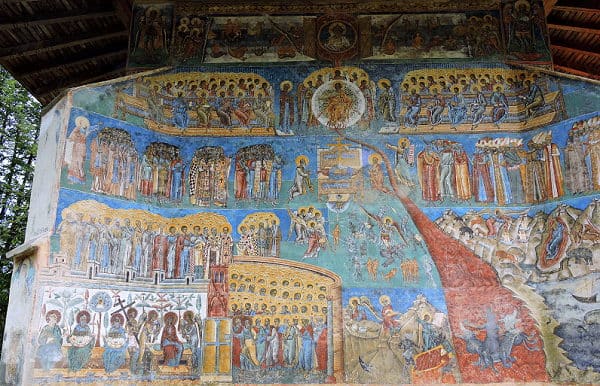 The beauty of its devotion is overwhelming — 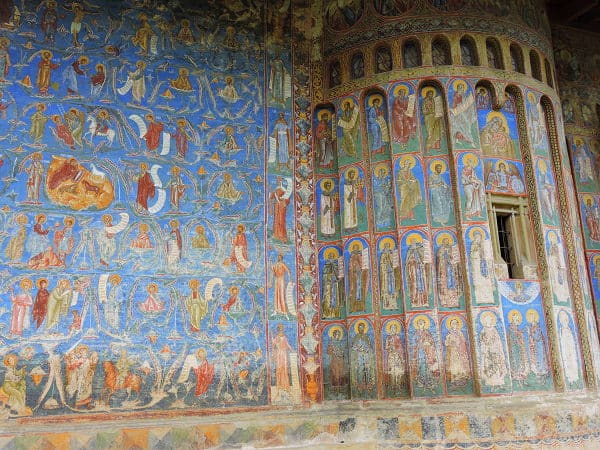 On a visit there last month (September), I was taking a lot of photos, and it was only when I got back home did I take a close look zooming in on them.  For example, here are Joseph and Mary worshipping the Holy Spirit symbolized by a white dove: 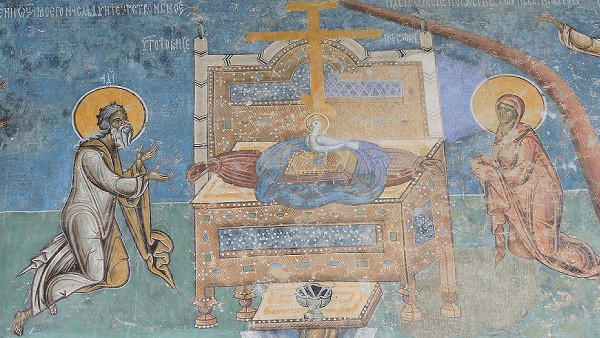 And St. Peter taking saints through the Pearly Gates into Heaven:

Then I zoomed in on a panel that made my jaw drop to the floor.  It was this:

Believe it or not, this made me think of the tsantsa on display in my study.

That’s because on my visits to the Amazon over the years, I had learned that the fundamental basis of the Shuara Jivaro religion is the interpretation of visions induced by natema, a tea made from the banisteriopsis vine.  As it grows throughout the Amazon, elsewhere Amazonian peoples call it ayahuasca. It contains a hallucinogenic compound known as dimethyltryptamine.

Through natema, and guided by the shaman who explains the visions, the Jivaro see with their own eyes the origin of the world and mankind, meet supernatural beings, and come out of their trance convinced of the verifiable truth of their religious teachings.

Here comes the kicker. Such hallucinogenic drug experiences are the foundation of the religious beliefs not just of Amazon headhunters, but of India, Ancient Greece, and the Witches of Salem.

Many of the hymns in the Hindu scriptures of the Rig-Veda written over 3,000 years ago are devoted to the god Soma, who instantiates himself upon the earth in the form of a plant. The Brahmins, the Hindu priests, by eating the god in a sacred ritual, were allowed to commune and become one with the Divine.

Part of the ritual involved drinking the urine of the priests who had eaten Soma. There is only one natural hallucinogenic chemical that passes through the body metabolically unchanged – muscimole – which is found only in the Amanita muscaria mushroom. How Hinduism was originally a sacred mushroom cult is described by historical ethnobotanist R. Gordon Wasson in Soma: Divine Mushroom of Immortality.

The Amanita muscaria is the classic Disney cartoon mushroom with the red cap and white spots. 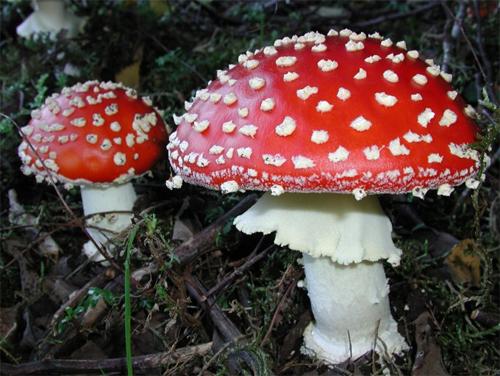 The Aryans who practiced Hinduism were an Indo-European people who had migrated east out of their homeland – the steppe grasslands between the Black and Caspian Seas – first to the Altai of south Siberia about 3000 BC before they moved into India about 1500 BC.  In the Altai they learned how people there practiced shamanism.

The religious practices of reindeer-herding tribes like the Tungus in Siberia and the Lapps in Scandinavia are based on the shaman eating the Amanita mushroom and sharing his urine with the devotees. The herders figured this out by watching the reindeer eating the mushroom, then licking each other’s urine spills, then acting very strange.

One of the commonest hallucinations with Amanita is the sensation of flying. Does the notion of flying reindeer bring anything to mind?

And what are the colors of Santa’s costume?

This is just between us: Don’t ever tell your kids Santa started out as a ‘shroom. (Actually, this is becoming accepted by scholars.  Live Science gives 8 Ways Amanita Explains Santa.)

For 2,000 years, the greatest religious ceremony of Ancient Greece was the Eleusinian Mysteries, the initiation rite of the cult of the goddess Demeter. The initiate was given a sacred drink, Kykeon, enabling him to gain secret wisdom.

It was called a “Mystery Religion” because if an initiate revealed anything of the ceremony, he was killed. That’s how it stayed mysterious.

Researchers such as Wasson have now determined that the Kykeon was made from the ergot fungus Claviceps paspali growing on certain wild grasses, and containing the LSD-like hallucinogenic alkaloid ergotamine. This is detailed in The Road to Eleusis by Wasson and biochemist Albert Hoffman (the discoverer of LSD).

A similar ergot fungus, Claviceps purpurea, grows on moldy rye. Eating bread made with such moldy rye induces ergotism where the victim has delusions (especially of flying), mania, burning sensations on the skin, and generally scary weird behavior.

In a paper for Science magazine, Ergotism: The Satan Loosed in Salem?, researcher Linnda Caporael describes how the people executed for being witches in the 1692 Salem Witch Trials were suffering from ergot poisoning via contaminated rye bread.

So here I am at the Voronet Painted Monastery, where 500 years ago in a remote church in the Carpathians deeply devout Christian artists depicted Adam and Eve in the Garden of Eden, the serpent tempting Eve to eat the fruit of the Tree of Knowledge of Good and Evil — and the Tree as the Amanita mushroom.

Zooming in, there’s Adam and Eve with the Tree, eating the Tree encouraged by the serpent, and in the next panel knowing they are naked covering themselves with fig leaves: 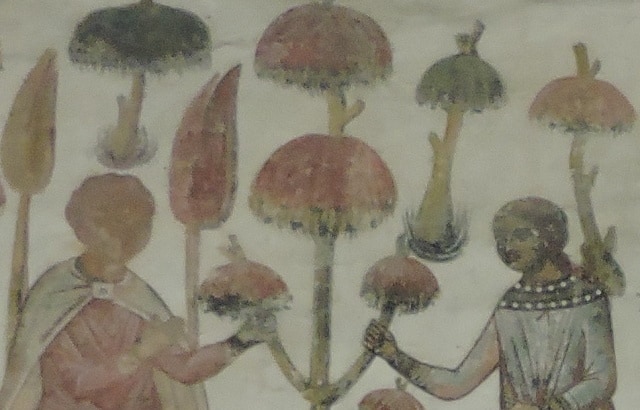 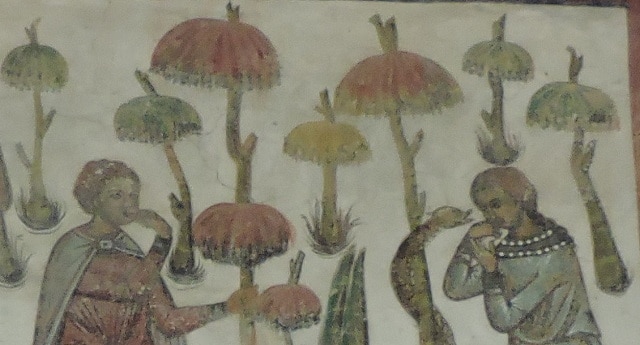 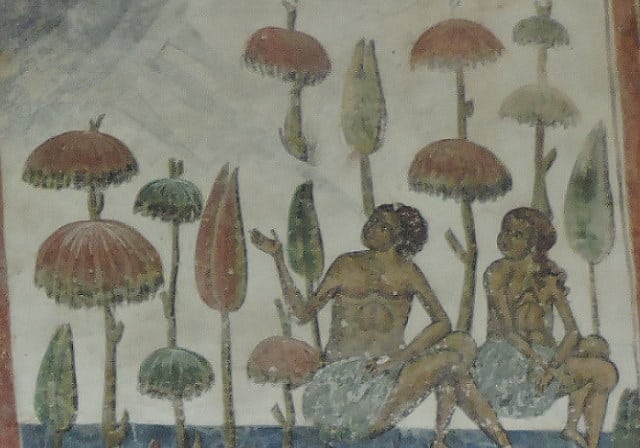 What’s going on here?  Amanita muscaria is commonly found in the Carpathian forests.  Did the Voronet painters engage in Amanita ceremonies giving them visions they used to paint their churches?  Did those visions make them decide it was Amanita and not an apple that Eve ate?

Or does it harken back to an earlier tradition – as Wasson in his book Soma suggests?

Hallucinogenic plants can be dangerous and deadly poisons. Yet, from time immemorial, humans have used them as a pathway to the gods. This pathway can be mentally poisonous, for it results in an inversion of reality.

From the Hindu mystic to the Jivaro headhunter, the belief is that reality is an illusion, that the hallucination induced by a psychedelic drug or trance is the “true” reality. The drug or trance “parts the veil,” so the devotee can see the world as it “really” is.

Yes, this is nuts, so nuts that no one behaves consistently with it. Some pseudo-intellectual mystic philosopher can mouth words all day long about how reality isn’t real, but when it comes to what he does, he puts gas in his car and avoids driving into a telephone pole in order to get somewhere just like everyone else.

Yes, we all have moments when it seems that reality is nuts – times that make it tempting to believe the headhunters are right about reality.

That’s when it’s time to reassure ourselves that they are not. That it’s time to exercise our capacity for reason provided by Providence as our only means of successfully dealing with the one and only reality we have while we are here on this earth.

That capacity is your oasis when it seems an ocean of craziness is lapping at your and the world’s feet.

From now on though, you’ll have a whole new perspective when you see this jolly old red-and-white guy with his reindeer: 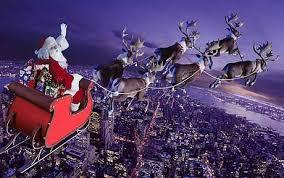 I hope you enjoyed reading this article: The Painted Monastery, Headhunters, and Santa Claus. If you have any questions, please contact our office HERE.

Unique Things to Do while in Denmark

How We Moved to Belize and Made It Work, Part 2

The How and Why of Retiring in the Dominican Republic