The Underbelly of South Korea: A Woman's View - Escape Artist 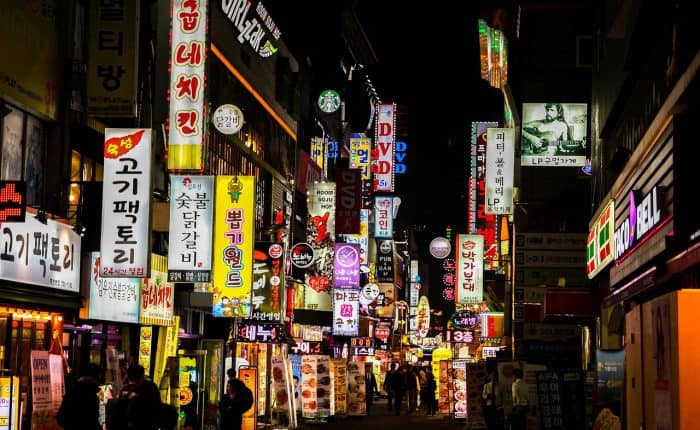 Perfect bodies, diamante-trimmed thongs, contortionist-like moves… This was the initial visual picture that my mind generated when I heard about the 7 Club in Korea – a Russian strip club. They are very popular all over Korea due to the close location of the countries and the dream for Russian girls to make a year’s salary in a week!

Perhaps this image however, was compounded by the fact that any time I asked a guy about it, I would hear vague descriptions and a lot of “well, eh….you know…” replies. Maybe it’s the culture of arranged marriages (albeit, severely diminishing), the societal taboo of sex before marriage, or merely a rebellious, hedonistic view to society, but the prevalence of a legitimate sex industry here, is one that surely must make Buddha blush!

The room salons (where men can go to drink soju, sing and have sex), the Russian bars, love motels, barber shops offering more than a shave, coffee girls (which have the reputation for delivering more than just coffee)…

It is an industry however, that unlike Amsterdam, tries to hide itself.

So, while having a regular Thursday night dinner, my friend and I decided that we had too many questions about the other side of Korea, and that we’d only be satisfied if we had some experience of exactly what these girls felt.  I’m not going to say that I swapped jobs with a room salon employee.

(I’m sure it would have been an intriguing experience, however!) Instead, we did what we could, without removing any articles of clothing!  We paid a visit to the renowned Russian 7 Club.

On entering, we immediately felt welcome and sat at the bar. What we witnessed was not an exotic, naked strip-show, but in actuality, something much tamer! The girls were also wearing a lot more than what my friends and I used wear to regular clubs in Ireland! They were merely sitting, chatting to guys and drinking those drinks which cost, when bought by these men, almost triple the price of a regular drink. Next, and to our interest, came the “strip-show”. At the start, it was a couple of girls taking it in turns to dance around the steel, silver pole. It wasn’t what I would call sensual, sexy or exotic! I actually felt that I could do better myself (and perhaps have during that period when my friends and I drank copious amounts of tequila and sambucca!).

Then came, perhaps the “jewel” of the bar – a very slender, but curvy blonde, wearing a pink thong bikini.  But that was the extent of the entertainment!

We then sat with and chatted to the girls (obviously it was a slow night!).

Anna had just come from Seoul, but had been in Korea for over a year. She had to leave Russia because there wasn’t even a glimmer of a window of opportunity for her there, and came to Korea merely to make some money, so that she could go back to Russia and have somewhat of a “normal” quality of life.  She informed me that, all her job, with a salary of about $1000 per month entailed, was being in the club every night, dancing and talking and being polite to men.  Of course, if she did want to go further with any of the clientele, she perhaps would have been able to buy a new pair of knee-high boots.

Not alone was it a very educational night for my friend and I but also very liberating!  Perhaps it was because of the strong liquor, the atmosphere or maybe a need for self-expression, but I developed a strong attraction to the pole. I asked the lady behind the bar to play En Vogue’s “Free your Mind” and took to the stage!

I think I may have been wearing too many clothes to truly feel what those girls felt, but I have to say that it was a little difficult to get me to leave the stage!  I felt sexy, fun, free, feminine and in control – but there was no way I could truly empathise with the girls – for me, there was no money involved.  I felt a sense of freedom from self-expression, but for the girls that work there, they are completely at the mercy of the bar owner and there’s no freedom.

Since I came to Ulsan, Korea to teach six months ago, my beliefs have become considerably stronger. I’m quite an “independent woman” and my belief in equality is very strong. My sense so far from South Korea, is that this belief is not shared by the majority. What I have witnessed here, is a society where, what everything looks like on the surface is the main concern. Some marriages are almost a business partnership, where the women are in charge of the “household” department. They look after the home expenses, and the children (in this case, perhaps we’ll call them the “employees” of the business).

The men, CEO’s of the business, are in charge of generating the finance.  What seems to be the “Mission Statement” of these businesses?  For some, it seems to be to create a life with as many status symbols as possible and create products (children) that are even more successful, so as to compound their own financial and societal successes.

Some believe that South Korea is akin to the West in the 60’s – I’m not so sure.  They accept Americanisation but don’t seem to heed to it.  For various reasons such as huge economic growth within a very short period of time (the last 30 years) and a culture with deep-seated tradition, this is the way they are, and for me, adds greatly to a diverse travel experience!

Excerpted from “The Other Korea: The Underbelly Of South Korea” in Escape From America Magazine, Issue 48.

I hope you enjoyed The Underbelly of South Korea: A Woman’s View. For more information please contact our office HERE

Setting Up A Business In Dubai