The Partridge in the Pear Tree - Escape Artist 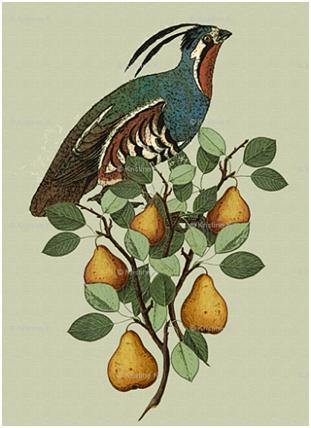 An oldie but a goodie from the past!

We’re in full Christmas Season with all the familiar carols we’ve heard all our lives being played in every crowded shopping mall.

From Jingle Bells and Rudolph the Red-Nosed Reindeer, to White Christmas and Silent Night – Holy Night, they bring back memories of Christmases of our childhood. Yet, one has always seemed a puzzle no matter how many times we’ve heard it. Isn’t Christmas one day, not twelve? And what do partridges in a pear tree and eight maids a-milking have to do with the birth of the founder of Christianity?

So, I thought it might be entertaining, as we enjoy all the festivities, to take a look at the song’s origin, meaning, and myth.

To begin with, while we celebrate the 24 hours of Christmas starting with Christmas Eve until Christmas Night, according to the song, the First Day of Christmas is the day after Christmas, December 26.

Ancient Christians celebrated Christmas starting with the day after the birth of Jesus and ending on January 6th with the visit of the Magi in Matthew 2:11, known as the Epiphany.

The earliest printed version of the song we know, The Twelve Days of Christmas, is in a children’s book published in London in 1790, Mirth Without Mischief.

It is called a “memory and forfeits” game played by children in the form of a song, where the leader recites a verse, each player in turn repeats it, and the leader keeps adding verses until a player’s memory fails him/her and has to forfeit a piece of candy.

Kids in 18th-century England, however, learned the game from French kids, who had been singing their version, In Those Twelve Days, since at least 1625. We know the song was originally French, as for example, partridges were introduced into England from France in the 1770s.

Even though The Twelve Days of Christmas was a kids’ song-game, it nonetheless had a deep religious meaning. Unlike the meaningless “Happy Holidays” of our time, for centuries Christmas was, above all, a religious celebration and still is for hundreds of millions of people around the world.

Thus, all of the song’s twelve gifts are Christian symbols.

On the first day of Christmas, my true love gave to me…

A Christian’s “true love” is God.

A partridge in a pear tree…

The partridge is Jesus; the pear tree stands for the Cross.

The French revered the mother partridge, which would feign injury to draw predators away from her nest and was willing to sacrifice herself for the life of her children, and used the bird as a symbol for Jesus who lamented in Matthew 23:37: “O Jerusalem… How often would I have sheltered thee under my wings, as a hen does her chicks, but thou wouldst not have it so.”

On the second day…two turtle doves…

The sacrifice Joseph and Mary made for Jesus (they actually sacrifice two turtle doves in Luke 2:24).

On the third day…three French hens...

The three things that abideth of I Corinthians 13:13 — faith, hope, and charity.

On the fourth day… four calling (in the English original, “colly,” or black) birds…

The four Evangelists and their Gospels: Matthew, Mark, Luke, and John.

Not rings on your finger, but ring-necked pheasants in keeping with the bird theme of the first seven verses. They stand for the Pentateuch, the first five books of the Old Testament known collectively as the Books of Moses.

The six days of Creation.

The Seven Gifts of the Holy Spirit, much discussed by Augustine and Aquinas: wisdom, understanding, knowledge, counsel, fortitude, piety, and fear of the Lord.

The eight Beatitudes, or those who are blessed from the Sermon on the Mount, Matthew 5:3-10 (the poor in spirit, who mourn, the meek, who thirst for righteousness, the merciful, the pure in heart, the peacemakers, who are persecuted for righteousness).

The nine fruits of the Holy Spirit listed in Galatians 5:22-23: “But the fruit of the Spirit is love, joy, peace, longsuffering, gentleness, goodness, faith, meekness, temperance: against such there is no law.”

The eleven loyal Disciples. We all know what happened to the twelfth.

On the twelfth day…twelve drummers drumming…

The twelve points of The Apostles’ Creed.

That’s the meaning. Now onto the myth.

It’s that the Twelve Days is a Catholic protest song, a secret catechism sung by English Catholics after Elizabeth I abolished “the old worship” in 1559 and forbade the open practice of Roman Catholicism (finally repealed by Parliament in 1829).

Yet, all twelve enumerated gifts of the song were believed in common by both Catholics and Anglicans — there is nothing in it exclusively Catholic needing to be secret and hidden. Further, the song originated in France, not England.

I have to tell you it was my son Jackson who gave me the idea to write this. The most wonderful Christmas present a man can have is his family and I am truly blessed with mine – my wife and our two wonderful sons. Christmas gives us the opportunity to reflect upon and appreciate the blessings we all have in our lives.

So, continue to have a Merry Christmas — all the way to January 6th.

Exploring the Teak Plantations at Gran Pacifica in Nicaragua