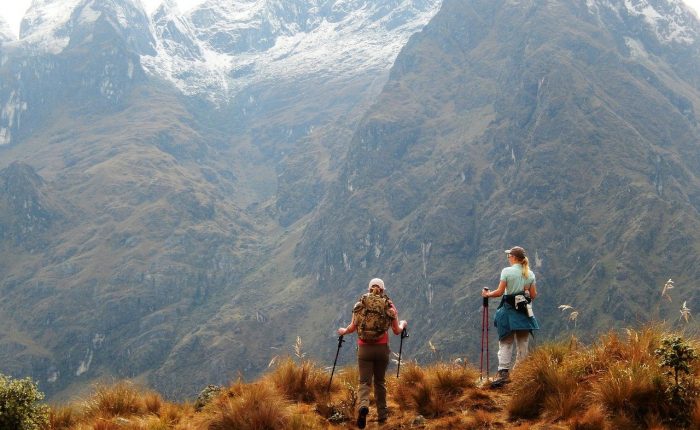 Then came the rain. Droplets of machine gun fire tapping against the dented tin roof. We huddled in our wet gear, waiting for the team. One cook, four porters, and a guide. The air was cold and thick with mist, and the village was barely visible in the chalky blue light of morning. This was Ollantaytambo, a 15th-century settlement in the Peruvian Andes, and our last chance for supplies before we entered the mountains.

We began in Cusco the night before, setting off in the dark as the late-night revelers stumbled home from the bars. Excited but weary, our stomachs were weak from a regrettable pre-hike meal of undercooked chicken and fermented corn beer. The drive to Ollantaytambo was a sickening few hours through undulating terrain and battered consciousness. My father and I had come to Peru as a means to escape the dullness of habit in the United States. We would hike the Inca Trail, a four-day trek through the Andes to the famed ruins of Machu Picchu. And like many well-to-do Americans in search of the adventurous glory of yesteryear, we were underprepared and out of shape.

Our guide arrived by van to Ollantaytambo and introduced us to the team that would ensure our success for the next four days. They were quiet, Andean villagers of short stature and dense muscle. They stood box-eared and permanently hunched like Greco-Roman wrestlers, their feet tied with handmade sandals of soft wood and rope.

“My name is Iric,” our guide said, introducing himself last. He looked like the others, though his English was more elegant. In the coming days, he would prove to be a rather pedantic type, waxing poetically on the nuances of string theory, Nietzsche, and cocaine production.

From there we packed into the van and began our drive upwards through the thick forest and scattered farmland. Each hour that passed, the pressure in my thermos increased with the elevation, ready to explode like a pipe bomb upon opening. Eventually, we met up with the Urubamba river. The trees gave way to a small, grassy clearing dotted with straw-roofed hovels that trembled in the shadow of the mountains

“Our trip begins here,” Iric said. “Be mindful of your footing and keep your breathing even.”

We organized our gear and readied ourselves with ponchos and rain boots, slinging our heavy packs over our shoulders, and making our way towards the first ascent. 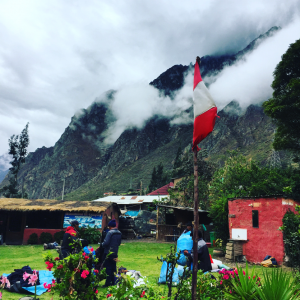 The first day of the trail is more about acclimation than anything else. Acclimation to the altitude, the elements, and the physicality of the hike. Our guide, Iric, led the way with an aggressive pace. I moved carefully along muddy stones and across slick wooden bridges, trying to keep up, though my gear magnified its stranglehold on my torso with every step. I regretted not spending more time on the elliptical machine back in the States. The porters, tasked with carrying the body-sized packs of cooking and sleeping gear, skipped past me like gazelles and disappeared around the mountainside.

By noon, I was getting used to the pace as the muddy paths evolved into drier forest. We traded rain gear for t-shirts, tying bandanas around our faces to protect against mosquitos and the glaring sun. At the top of a small crested hill, the first ruin on the trail was visible in the valley. Llactapata was a 16th-century village that had been burned by the last Inca king, Manco Inca, in an attempt to dissuade Spanish invaders from following him into the mountains.

The ruins were typical of what I’d seen in photographs. Arching shrines, the foundations of chiseled stone dwellings, rows of terraced steps that lined the base of the village like the ribs of a washboard. But to see them in person was something different. A flag of humanity, surprisingly advanced humanity, carved into the wildness of nature. 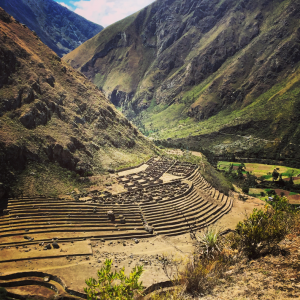 The Inca Empire lasted officially from 1438 to 1533, though the Inca people and their ancestors had been propagating the mountains for generations prior. During this time, they built a vast road system as a means to transport goods, relay messages, and partake in religious pilgrimages between the capital of Cusco and the Andean settlements.

In the middle of the 16th-century, the Spaniards arrived with foreign diseases and aspirations of conquest – a deadly combination for a secluded indigenous race. While most of the Inca road system was destroyed during these years of conflict, the thirty-mile stretch leading to Machu Picchu remained undiscovered by conquerors. Not until English explorer Hiram Bingham’s 1911 expedition did the path known today as the Inca Trail become uncovered.

As dusk fell, we came to a humble potato farm at about 9,6000ft above sea level. The surrounding area was called Wayllabamba, and our guide had secured permission to set up camp just beyond the rows of tilled soil. By the time we arrived, the porters had already pitched the tents and put a pot of water on the fire to boil. 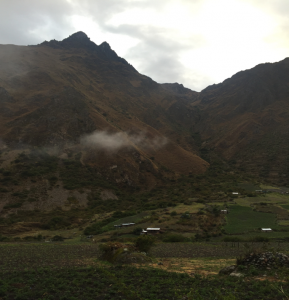 The sun had dipped beyond the distant peaks and the whole valley was painted in deep blues and purples. For a city kid, the moment was almost too much for my senses. The air was pure, the sky was clear, and the stillness of the mountains was a brand of quiet that I had never heard before. My father felt it too, and I could see that the thrill of adventure outweighed the exhaustion in his face.

That first night we ate hot bowls of vegetable soup and chewed dense bread until the moon shined silver in our eyes. I retreated to my small tent at the edge of the campsite, taking inventory of my sore muscles and falling asleep to the song of wild dogs baying at the stars.

Things progressed quickly on the second day, as we adopted a faster pace to beat a coming rainstorm. My canteen was full with fresh coca tea to help with the coming elevation, but to no avail. By 9am I was gasping for air as I climbed the steep gradient towards Warmiwañusqa, or Dead Woman’s Pass.

For a novice hiker like myself, the name alone was ominous, and after a few hours I felt like I was crawling on my hands and knees to avoid crashing down the slope behind me. My father trailed behind by a hundred yards, which in hiking terms might as well have been a day. Iric dropped back to walk with him, and I lead the way up the mountain as the air turned from temperate to frigid. The wind started hard from the east, swirling around the peaks and throwing off my balance. With every thousand feet of elevation, the atmosphere changed. The stone steps glistened with frost and small beads of hail bounced against my face.

Dead Woman’s Pass is the highest point on the Inca road system. Its name derives from a rock formation, shaped like the mangled body of a woman, visible from the peak. The pass itself is a sort of emotional apex on the Inca Trail: a test of endurance and dedication that serves as a rocky border between the wooded forests and the lush jungle that follows.

After nearly five hours of climbing, the crest of Dead Woman’s Pass was visible. I moved at a glacial pace for the last hundred meters, my joints nearly frozen in their sockets from the cold wind and sharp incline. At the peak, a wooden sign stuck up from the ground: Warmiwañusqa – 4215m. Nearly 14,00ft. I was a little disappointed at the sight of the sign, forgetting for a moment that I wasn’t discovering a new land for myself. The view was spectacular and the moment provided a true sense of accomplishment, energizing my oxygen-weary soul. 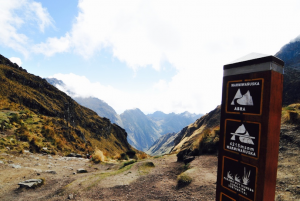 The long descent from the pass was a welcomed change, and for the next few hours I shed layers and traversed down the mountain at what seemed like a sprint. The atmosphere changed from bare and craggy to humid and vegetal in a matter of an hour. I arrived at the second camp by the early evening, where the porters had secured an astonishing location overlooking a cloud-lined valley. The area was known as Pacaymayo, meaning “sunrise” in an Andean dialect. 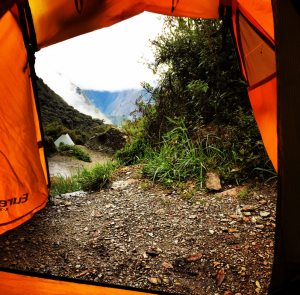 When the rest of my party arrived, the rain had just begun to fall. We waited out the downpour under a small canvas shelter that the porters had erected, eating stewed chicken with potatoes as the camp flooded around our ankles.

To be continued…The Inca Trail: Four Days in the Footsteps of History, Part 2