Across the Sahara - Escape Artist

A Trans-Sahara Expedition, crossing the remotest heart of the world’s largest desert, has always been one of the truly great explorations possible on our planet.

Unfortunately, it’s far too dangerous to do today, with banditry and terrorist attacks on travelers. Someday this will cease. So I thought I’d show you what an extraordinary experience it was to cross the Sahara when it was safe back in 2003 – for it will be again.

In the center of the Sahara is the country of Niger. We’re going to cross it from one end to the other to find one of our world’s special places, of achingly lonely beauty, of fascinating and friendly peoples, mysterious lost cities, hidden oases, and camel salt caravans. We’ll end by exploring on foot an astounding region where Niger, Libya, and Algeria come together – it will blow you away.

Departing from Niger’s capital of Niamey on the Niger River in our 4WD Land Cruisers, we head northeast through semi-arid shrublands to locate a group of cattle-herding nomads called the Wodaabe. With luck, we find the men performing their Yaake dance to impress the ladies with how handsome and desirable they are.

Their male plumage and decoration is as spectacular as any bird-of-paradise performing a mating dance.

Continuing on, we enter the true Sahara, reaching the only real town in the northern two-thirds of the country, Agadez. The people here and scattered throughout the region are the aboriginals of the Sahara, inhabiting it for many thousands of years, the Tuareg – the legendary Blue People of the Sahara.

That’s due to the men wearing an indigo-dyed cotton turban and veil called a tagelmust that stains their skin blue.  It’s to protect them from the sun and sandstorms. These are the folks who guide you through the trackless sands. Here are two of our Tuareg guides with my then-ten-year-old son, Jackson.

The Tuareg are ruled by a Sultan who lives in his palace in Agadez. A Sultan’s Palace out of a fairy tale? The Saharan reality is different.

Now we get serious. We must cross The Ténéré (tain-er-ray), the Desert of Deserts, a sand sea where nothing, not a blade of grass, grows for thousands of square miles. 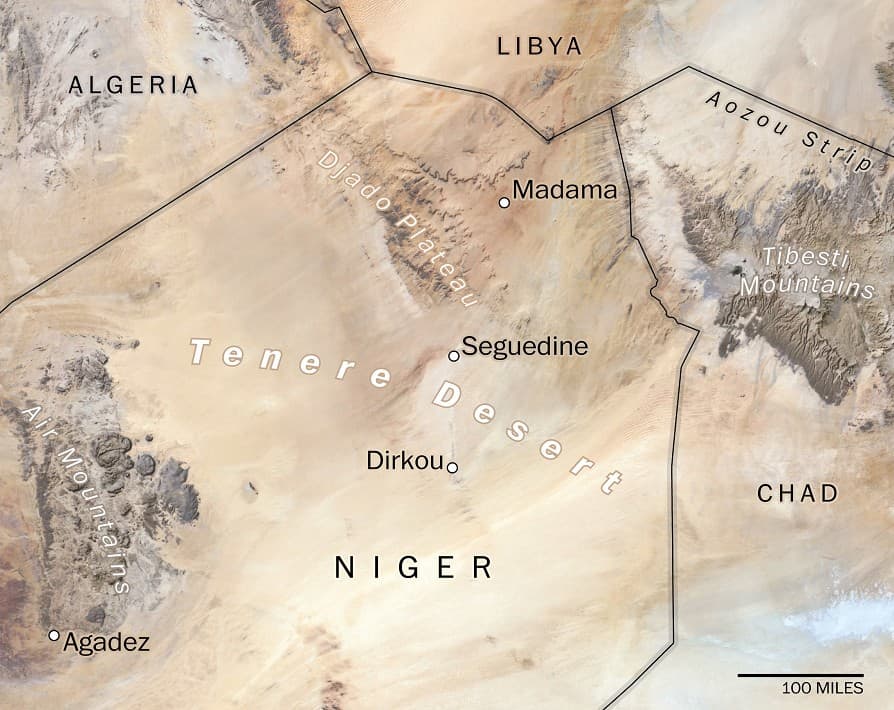 Camping amidst the Ténéré dunes is an experience one never forgets.

Yet, what do we find in this vast emptiness? Rock outcroppings with petroglyphs carved by the Tuaregs’ ancient ancestors 10,000 years ago when the Sahara was like East Africa today, a well-watered grassland teeming with life, such as giraffes and elephants.

Nearing the eastern edge of the Ténéré, we come upon the tiny hidden oases of Fachi and Bilma, where natron salt pools are still providing salt for the camel salt caravans as they had since the days of the Romans two thousand years ago.

The evaporated salt is compressed into cakes and loaded in reed baskets onto camels for caravans to Agadez.

Camels, by the way, are not particularly friendly. Here’s the prize camel of a Tuareg caravan leader telling me, “Don’t even think of sitting on my back.”

Exiting the Ténéré, we reach the crossroads of Seguedine (seh-guh-deen). The friendly kids were fascinated by Jackson…

As were the ladies providing needed services to the camel caravan leaders and drivers.

As Seguedine is a crossroads for not just the caravans from the Ténéré, but also tracks from Chad and thence to Algeria and Libya, here is where you see those trucks piled high with Africans on their way to the Mediterranean coast to sneak into the welfare states of Europe.

From here, our 4WD Land Cruisers take us up onto the remote Djado Plateau to discover the mysterious ancient Lost City of Djado. Abandoned 1,000 years ago, no one knows who built it and how long ago – at least 2,000 years ago during the Romans’ times with their salt coming from Bilma and Fachi.

To explore the labyrinth of the mysterious Lost City of the Sahara is beyond fascinating. We had it to ourselves – no one has lived here for a millennium. It’s unknown, unexplored, unexcavated, lost in the remotest Sahara.

From here we venture north crossing into Algeria for the most astounding place in the entire Sahara.

In the southeast corner of Algeria bordering Niger and Libya there is a town called Djanet. Rising above it is a plateau called the Tassili n’Ajjer. Deep within it is a region called the Tadrart. There are no roads – you must climb up here with pack mules carrying your supplies.

Not only is the Tadrart so geologically unique it seems unworldly, it also contains the greatest profusion of prehistoric rock art on earth. The combination does strange things to some explorers’ brains, thinking that some rock paintings depict space aliens, rather than, say, tribal shamans. See for yourself. Realize the rock art is up to 10,000 years old.

Most famous is “The Monster of Sefar” – which charlatans like Erich von Daniken convinced many gullible readers of his books was an alien in a space suit. Here’s Jackson and me with the monster.

But that’s not all. In the middle of the Tadrart is a vastly deep gorge, like a knife split open the mountain. Climb down to the bottom and you will discover a forest of 2,000-year-old Saharan cypress trees – yes, a forest in the Sahara.

Thousands of years ago, the Sahara had lakes, rivers, forests, animals to hunt in profusion – it was a paradise for those ancient people who lived here long ago. Today’s burning sands have replaced all that, except in this hidden spot.

Yet, there is beauty even in those sands.

But you can’t go there now. It was safe once, but no longer. When will it be safe again? Who knows? The lesson is… carpe diem.

We all tell ourselves what we’re going to do “someday” – and life goes on with that someday never arriving, or when it does it’s no longer possible to do what you wanted.

How to Retire in Thailand with a Long-Term Visa

Advice for Those Looking to Move and Live Overseas in Turkey