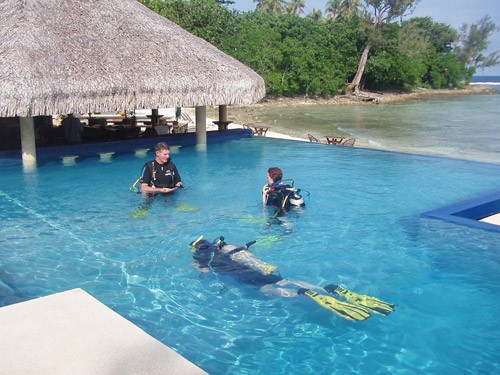 The President of Vanuatu Scuba Operators Association (VSOA), Mike Crawford, says Vanuatu has the potential to be the best tourist related country in the whole South Pacific.
Crawford gave his view while discussing the future of scuba operations in the country as a contributor to tourism development in Vanuatu.
He has confirmed information from the Department of Tourism that the department and its stakeholders including VSOA have been working on new standards for the whole tourism sector for the last three years. This hopefully will be gazetted this year by the government to become legal so that everyone must adhere to specific standards. Much of which for VSOA they have been going on for the last 25 years.
“We’ve all become a little bit better,” he said. “We can always learn from it if anything ever gets wrong and that’s what we’ve done. Everyone has to be a member of an association and they have to adhere to these standards which we are now bringing into place.”

VSOA has 10 members – five operators in Efate, one in Tanna and four up in Santo.
Crawford says RAID, a new international organization for certifying scuba operators and divers, has undertaken to bring Aqua Marine back up to standard. A representative of RAID will be here some time next month to have a look at all their standards and ensure they are back up to where everyone else is.
“One of the things they are bringing in with the new standards is we must test our tanks every one year visually to ensure there is nothing foreign inside of it. Every three years we pressure test them to make sure we are with the world standards. So, we will be operating as any international guide company,” he added.
The President of VSOA projected that Vanuatu has the potential to be the best tourist-related country in the whole South Pacific region.
We need to get that tourism up and going again to become the strongest tourism country in the whole south Pacific.
He said Vanuatu has only a small population of less than 300,000 and “if we could get tourism moving properly here we could give everyone a job and this place could start to get the country really going”.
He projected too that in 10 to 15 years the locals working in the dive industry will run their own dive tour business and that’s great news for the Vanuatu Scuba scene.