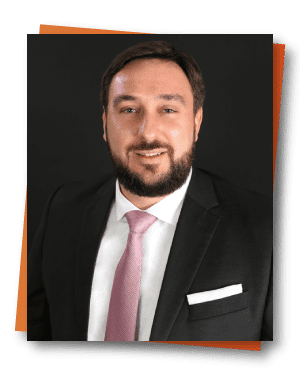 Luigi Wewege is President of award-winning Caye International Bank, headquartered in Belize, Central America. Outside of the bank he serves as an Instructor at the FinTech School in California which provides online training courses on the latest technological and innovation developments within   the financial services industry. Luigi is also the published author of: The Digital Banking Revolution which is available in audio, kindle and paperback formats throughout all major international online bookstores and is now in its third edition.

Previously Luigi was the Chief Executive Officer of Vivier & Co a boutique financial services firm, the Commercial Manager of publicly listed Investment Research Group a financial advisory company where he led their media division, and was a Senior Consultant at The Braintrust Network which was a bespoke management consultancy. Notably, while Luigi was completing his undergraduate degree he executed a pilot study for the Federal Trade Commission during one of the most serious financial  times for the American economy. The primary focus of the study was to examine and determine the accuracy of credit bureau information, with the research he conducted ultimately providing the impetus for a report which was presented before the United States Congress under Section 319 of the Fair and Accurate Credit Transactions Act of 2003.

Luigi holds a Master of Business Administration with a major in international business from the MIB School of Management. He also holds a Bachelor of Science in Business Administration with a triple major in finance, international business and management – cum laude from the University of Missouri-St. Louis (UMSL). Whilst at university Luigi was a multiple recipient of the Dean’s list, Coaches and Athletic Director honor rolls, as well as being a recipient of the Great Lakes Valley Conference Academic All-Conference honors. Other academic achievements for him include: being formally inducted into   the Financial Management Association – National Honor Society, and the Epsilon Eta Pi – International Business Honor Society. More recently, he was the honored recipient of the Salute to Business Achievement Award which recognizes outstanding UMSL business alumni and the Outstanding Young Alumni Award, which is given annually to a recent graduate of UMSL for significant early professional achievements that inspire other alumni and bring honor to the university.

One of Luigi’s passions is to create development opportunities that empower young people to create positive change, and this has led him to starting his own Foundation which provides an annual academic scholarship to a deserving American student. Previously he served as a Director and Trustee of Doing Good Fellows a pioneering non-profit which uses technology to facilitate an ecosystem  where accomplished professionals use their skills, and networks to deliver global social impact. Luigi    is also the past President of Junior Chamber International (JCI) – Metro, which is a worldwide youth service organization with members in over 120 countries, and consultative status with the Council of Europe, the United Nations and UNESCO. The primary focus of Luigi’s presidency was to create innovative fundraising initiatives to assist JCI’s partnership with the United Nations Foundation and Nothing But Nets campaign, which helps prevent malaria deaths by purchasing, distributing and teaching the proper use of mosquito bed nets throughout Southern Africa.

Outside of work Luigi enjoys participating in a variety of sports and has competed in several at a high level. Select athletic achievements for him include: being a former national junior champion in swimming, and a National Collegiate Athletic Association golfer on university scholarship. For more information about Luigi, please visit his personal website here: www.luigiwewege.com.