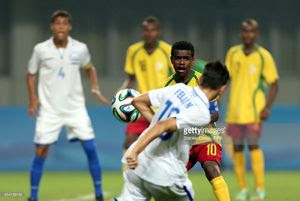 The Phoenix Academy would like to welcome Vanuatu young superstar, Ronaldo Wilkins to Wellington, New Zealand.

Ronaldo who was part of VFF Football Academy program at Teouma last year will be based now at Scots College for his schooling and will participate in training sessions for the Scots first 11 and the academy.

He played for Vanuatu in the OFC U-17 competition in American Samoa early this year and has a great future to play for Vanuatu U-20, U23 and the national senior team.

“I also thank Wellington Phoenix for their contribution and I am sure he will learn a lot from them.”

Young Ronaldo follows the footsteps of his father, Richard Wilkins who played for the Vanuatu senior and won Melanesian Cup in Noumea, New Caledonia in 1990.

Although these days, his father has switched from football to being the Silver Medal Coach for the Vanuatu Pacific Games Men’s Hockey team, he could be seen during every matches Ronaldo plays at the Port Vila Stadium, with Shepherds United last season.

Ronaldo’s break through is the result of the relationship APFA has with Oceania Football.

What is your first football club?

What is your preferred position?

Who is your favourite Phoenix player and why?

Which football club do you support other than the Phoenix?

Who are your ideal roles models in regards to your football career?

What are your aspirations/dreams for the future?

What are your hobbies outside of football?

When did you start with the academy?

What is your career highlight to date?