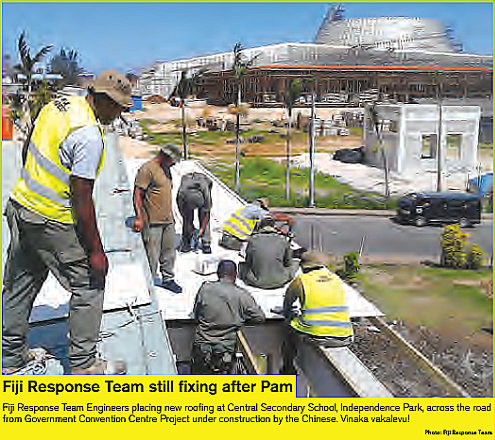 Vanuatu’s Ambassador to the European Union Roy Mickey Joy has assured the Commonwealth secretariat in London that plans have not changed and Vanuatu will host the Commonwealth Heads of Government Meeting in 2017.

The Ambassado made the confirmation in his meeting with the Prime Minister in his Office.

He said after the CHOGM meeting in Malta in November of this year, there after is going to be a “very busy period for Vanuatu”.

The Government machinery is going to prepare the country’s biggest challenge yet, to host the next meeting which is expected to attract 54 Heads of Governments and their officials to Port Vila.

Those Heads of Governments are going to include the Prime Ministers of South Africa, India, Canada and England where the Head of the Commonweal, Queen Elizabeth II (due to her age) is going to be represented by either Prince Charles or his eldest son Prince William.

In order to facilitate the process with the Secretariat in London, The Ambassador said he has discussed with the Director general for foreign affairs, Johnny Koanapo and now the Prime Minister, the importance to appoint a Government representative to man an office in London to liaise with the Marlborough House to cater for the meeting.

It is a recommendation that the Prime Minister indicated his support for. The Ambassador said, “Neither Papua New Guinea nor Fiji or even Solomon Islands has hosted CHOGM yet apart from Australian and New Zealand, so Mr. Prime Minister we are taking the risk (to host it) because I believe the advantages are enormous.

“We are meeting at High Commissioner level in London and I can assure you Mr. Prime Minister that the CHOGM Meeting in 2017, will be attended by all the Heads of Commonwealth Governments.”