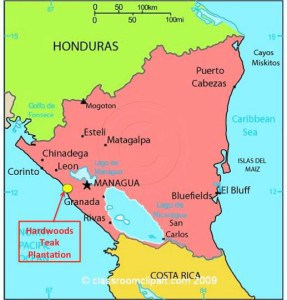 Nicaragua is a Central American nation located North of Costa Rica and South of Honduras. It is one of the first places on mainland America to be colonized, and home to the oldest colonial city in the Americas, Granada. The climate of Nicaragua is tropical, with a dry season from November through April, and a rainy season from May to early November. While this is not entirely consistent throughout the country, the variation is relatively slight.

The country of Nicaragua is divided into what are called departments, and consists of three distinct regions: The Coastal Pacific, Caribbean Lowlands, and Central Highlands. These regions are defined by their geographic qualities, as well as their level of development. The Coastal Pacific encompasses the majority of metropolitan areas in Nicaragua, including the capital city Managua, and colonial cities Granada and León. The Coastal Pacific region also drives the majority of the country’s tourism, and is home to the teak plantation located at Gran Pacifica Beach & Golf Resort. High temperatures are generally between 85-91­oF (28-32oC) throughout the year, and soil conditions are excellent for the growth of teak.

The Central Highlands have a slightly cooler climate, with highs between 75-80oF (23-27oC), and receive more rain throughout the year than the Pacific. Much of the country’s agriculture is centered in this region, and coffee is grown in the higher altitudes. The climate of this region is often called “eternal spring” due to the mild temperatures and frequent misting of rain. This region is primarily rural, with many towns and the major city of Matagalpa, Nicaragua’s second-most populous.

The Caribbean Lowlands are primarily rainforest, and are characterized by high temperatures and humidity. Much of this region is protected from development by the government, and the two largest departments on this coast are special autonomous regions. This is due to the historic land rights of the indigenous, as well as the country’s desire to preserve its biodiversity. There is also a Creole population on the Caribbean coast, but the area overall is sparsely populated.

Nicaragua has a remarkably diverse landscape full of natural wonders and outdoor activities. The country’s many active volcanos are a major source of tourism, as are its legendary surf breaks. Thousands of expats and millions of tourists have been drawn to the country’s natural beauty, colonial cities, exciting beaches, and remarkable investment opportunities.

As an undervalued, rapidly growing market, Nicaraguan real estate has begun to draw major attention around the globe. Nicaragua’s investments in infrastructure and security have also paid off, as the country boasts modern highways and is the safest in Central America. Hardwoods Unlimited is excited to be working in this rapidly expanding market, and Gran Pacifica provides an ideal, picturesque home for the company’s newest plantation, complete with infrastructure, underground utilities, and a beachfront resort, making it the perfect place to relax in a hammock as your teak trees grow by your side.