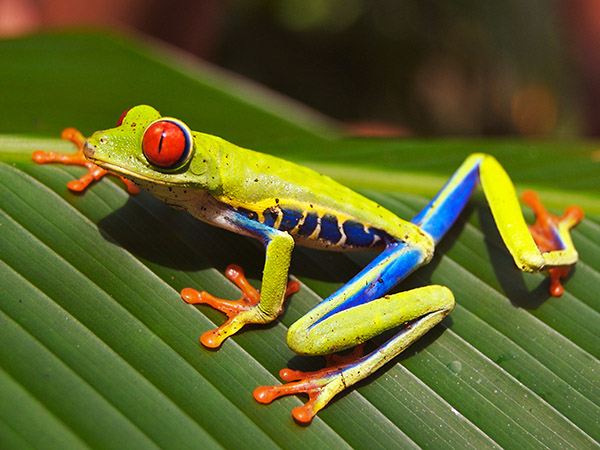 Since the monkeys, sloths and toucans get most of the publicity, we thought a focus on the aquatic wildlife was in order.

Recognized in 1989, the Marino Ballena National Marine Park was the first national marine park in Costa Rica. It was created to protect the marine ecosystems associated with the beaches, mangroves, islands and fragile coral reefs, one of the largest on the Pacific Coast of Central America. The park stretches from Uvita’s famous Whale’s Tail south to Playa Piñuela, and then 9 miles out into the Pacific Ocean. The islands called Tres Hermanas (The Three Sisters) and Isla Ballena are contained within this triangular park.

In addition to enhancing many of the ocean view properties in the area, these coastal landmarks are home to thousands of aquatic and terrestrial species.

“Ballena” means whale in Spanish. Both the southern and northern hemisphere female humpback whales visit the area between the months of November to March. They arrive to give birth and nurture their calves in the calm, aquatic environment. Although there are daily whale sightings in the peak season, this majestic mammal is still on the endangered species list. If you haven’t seen one up close, you will want to add a whale-watching tour out of Uvita on your Bucket List.

For those who do not enjoy boats or the open ocean, you can still enjoy the experience from land. We frequently see whales spouting from the beach many times, but one event during a visit with my parents stands out. We were enjoying a nice, ocean view breakfast when suddenly a slate blue whale suddenly breached in the middle of the bay. Over the next half hour, it continued to jump, twist, and crash sideways at least 20 times. Without question, it was the most memorable breakfast we have ever shared together.

Return Of The Ridley

The humpback whales and dolphins are just a couple of many creatures inhabiting the marine park. Sea turtles are another majestic species that return to nest on these specific beaches every year. Thanks to conservation efforts, Ridley turtle numbers are actually rising in the southern Pacific. You can see them while snorkeling around the Whale’s Tail or one of the islands off the coast. Watching a baby sea turtle dig out of its sandy nest and instinctively scratch its way to the water makes a lasting impression for people, young and old.

Without question, the great outdoors, including the rich variety of marine life found in Parque Nacional Marino Ballena, is at the center of the Costa Ballena experience. It is one of the primary reasons tourists visit and why many of those tourists eventually invest in real estate and/or relocate in this part of Costa Rica. The immediacy of wildlife in the southern Pacific zone, like a 50-foot whale breaching during breakfast, adds value beyond measure.

Getting Residency in Costa Rica